I’m just going to be honest, I’m not that excited for this card. Half the fights have massive favorites that are there to shine and slightly improve their “star power” off of a lesser opponent.

The prime example of this is Jon Jones going against the “next big threat” in Dominick Reyes, while Valentina Shevchenko squares off against Katlyn Chookagian because everyone said “Fine, I guess she deserves a shot”.

I tried to scrounge what I could from the lines. Jon “Bones” Jones (25-1, 19-1 UFC) is the GOAT. There’s no argument, at least not from me.  His only loss was in a DQ because of illegal elbows. Jones began his MMA career as a wrestler and can boast a ridiculous 95% takedown defense, That’s after two fights with Daniel Cormier, just saying. From there, his kickboxing has gone through the roof, where he now has 10 wins by knockout. Jones loves his teep kicks and uses his massive frame at 6’4 with 84 inches of reach to throw all sorts of strikes. As I have said before and will say again, what makes Jones just SO good is his fight IQ. He studies tapes and always comes in with a gameplan and an amazing ability to know just how to react no matter what his opponent does.

Dominick Reyes (12-0, 6-0 UFC) tore through his first three fights without a second round, but is now off of two decisions, with one being a split with Volkan Oezdemir that many argue he lost. Reyes is a kickboxer with multiple KOs by head kick and solid power in his punches as well. The key to Reyes’ game is the absolute warring spirit and unrelenting volume that practically forces his opponents to fold. He has some ground skill and two subs on his record, but certainly tries to keep the fight standing. Sadly, Reyes simply doesn’t have the power of Thiago Santos or the ground skill of Anthony Smith, both of who Jones beat. Reyes is simply just a slight variation on a threat Jones has faced many times and will likely display himself like such.

Take the Shot: Jon Jones via Round 3 Submission

This one shouldn’t even be called a fight. 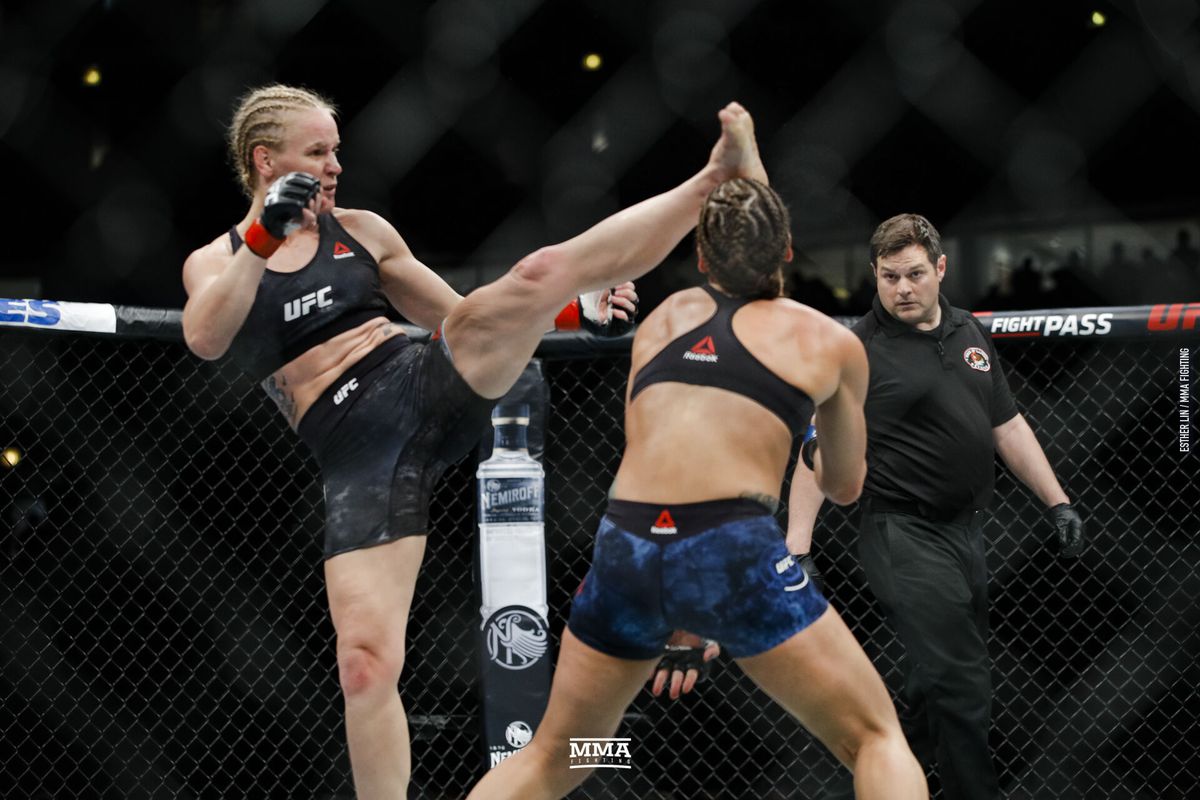 After an all out beating at UFC 238 over Jessica Eye, Valentina Shevchenko (18-3, 7-2 UFC) followed with a sub-par domination of Liz Carmouche. “Bullet” is truly an incredible striking with punishing Muay Thai and battering kicks and punches. On top of that, she has wrestling, which I imagine will be the difference maker here. In fact, she has more wins by submission than anything else. Shevchenko is truly an elite and losing two matches to Amanda Nunes is nothing to scoff at. She has a great jab to keep her opponent at bay and has looked the best of her career at 125 lbs.

Katlyn Chookagian (13-2, 6-2 UFC) has consistently been at the upper echelon of the Flyweight division. Chookagian likes to get her wins in with a high volume striking style and although she doesn’t pack the most power she has the overwhelming volume and technique to make every fight close. Both of her losses have come in split decisions to Liz Carmouche and Jessica Eye, both of who fought for the title. Her cardio and quick movement make her a problem for anyone to deal with.

There’s not much of a chance for Chookagian. She doesn’t have the power to close the show, doesn’t point fight as well as Valentina and has the much worse ground game. This will likely be another non-exciting win for the Bullet.

Derrick Lewis has always been fun to watch, for both his enticing personality and brawling style. Lewis is one of the few fighters on the UFC roster who cuts to the 266-pound limit and is shown through his style. He hits incredibly hard and while he is a slower fighter without much of a ground game, he can end the fight with one good shot. Just ask Alexander Volkov, who was destroying him until the very last minute of their fight.

Ilir Latifi (14-7, 7-5 UFC) is moving up to Heavyweight after a mediocre showing at LHW. I’m going to explain why this is a bad idea (even though I despise what weight cutting has become in our sport). The 5’8″ Latifi has shown struggles with the reach disadvantage he is almost always having to deal with but likes to get close using a flurry of punches. Latifi also has a great wrestling background and has shown a strength that Heavyweight champion Daniel Cormier has remarked on being one of the strongest grapplers he has ever faced.

Sure, Latifi has a nice wrestling background up against a fighter notoriously lost when the fight goes to the ground. Yet ultimately, Latifi will be looking at a 7-inch height disparity with another 6-inch loss in reach and what I’m guessing will be around a 50 pound gap in weight. If Latifi is to win, he has to control Derrick the ENTIRE match as he has no hope of striking with him.

Take the Shot: Derrick Lewis via Round 1 Knockout

Andre Ewell (15-6, 2-2 UFC) is off a beating from previously-on-this-card Marlon Vera. “Mr. Highlight” is a jack of all trades, but master of none with decent BJJ/wrestling and 7 knockouts to boost his record. In the UFC, Ewell has been mediocre, throwing some decent volume but with hardly any finishing power up against the other elite competition and also getting thoroughly whooped on the ground in almost all his fights.

Jonathan Martinez’s (11-2, 2-1 UFC) Octagon debut against Andre Soukhamthath went south in a decision, but made it up with his massive upset over Wuliji Buren and a FOTN earning third round KO against Pingyuan Liu. He really impressed me in that fight, using his counter-wrestling and growing jiu-jitsu ability masterfully against the superior wrestler. His striking is very unorthodox, throwing kicks and knees to set up his punches. Yet his scrambling ability is what sets him apart in my opinion, being able to reverse a position when it seems nearly impossible.

Ahhhh yes, finally a competitive matchup. Ewell has has the misfortune of going up against real killers of the 135-pound division in Marlon Vera and Nathaniel Wood, so those losses aren’t necessarily damning in and of themself. The issue does present itself when looking at Ewell’s wins, where he simply hasn’t had anything truly setting him apart. Trying to point-fight against a brawler and wily fighter like Martinez is a quick way to sink his ship.

Best advice I can give is to parlay the first three with an underdog shot on Martinez.

And of course, enjoy the fights.