What happened in Abu Dhabi?

We had an impressive 10 for 12 record on this night, aside from the tie between Zubaira and Lerone Murphy. And what a night it was!

Khabib looked entirely dominant once again, despite Poirier finding a touch more success on the mat than some of Khabib’s more striking heavy former opponents. In another light, Paul Felder came in with the upset in a great standup battle.

This week we have an amazing card out of Canada, all topped off by a Lightweight battle between two of everyone’s favorite sluggers, Justin Gaethje and Cowboy Cerrone.

Before that, we have tons of new prospects, including two fighters fresh off this season of the Contender Series along with some FFF favorites like Jimmy Crute and Louis Smolka!

It seems like Cowboy Cerrone (36-12, 23-9 UFC) is absolutely insane to be fighting so much. Although he is at 36 years old, this will be Cowboy’s fourth fight of 2019. With that match against Iaquinta, he showcased his striking. While I did not have serious doubts, it was an expert showcase. As I said in Cerrone’s fight against Al, he has seriously underrated jiu-jitsu and it has come through for him many times over. 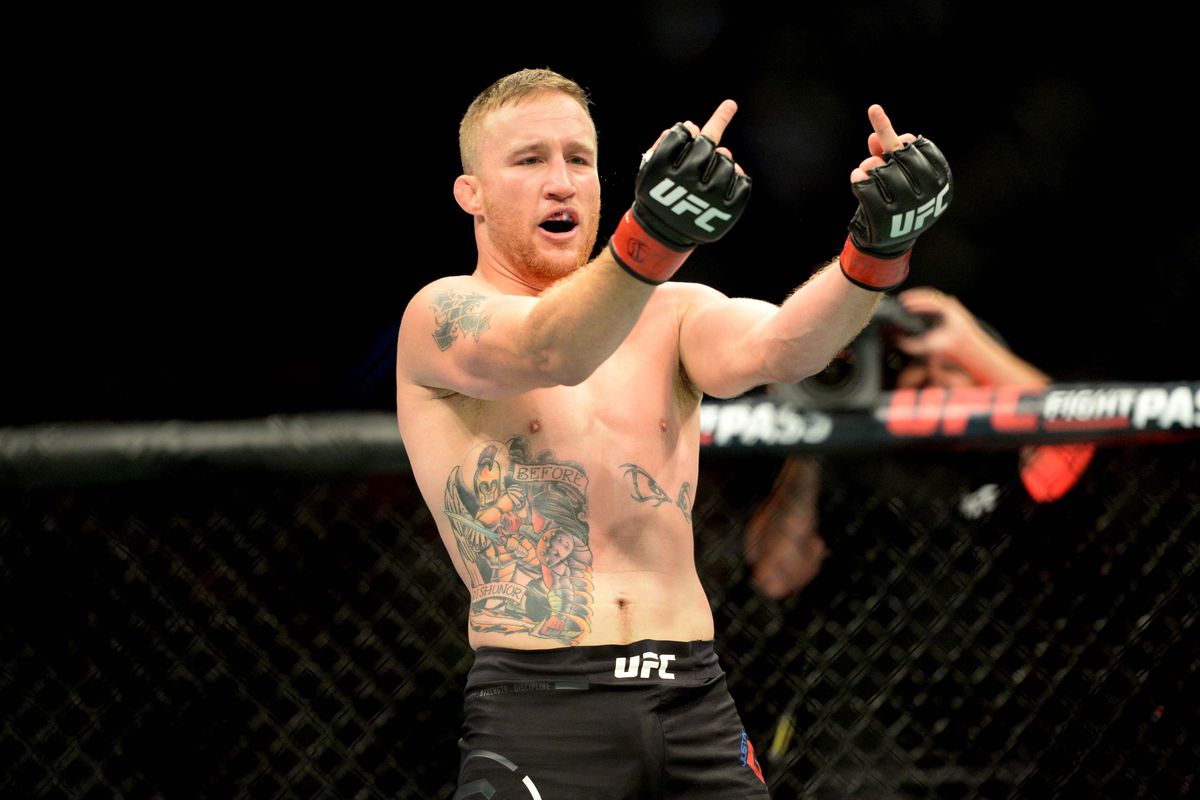 Justin Gaethje (20-2, 3-2 UFC) cannot be described as anything except a brawler. Gaethje’s record has an astounding SEVENTEEN knockouts on it. Gaethje has a CHIN on him and is well-known for going into brawls with the intent to stand and trade, as his moniker “The Highlight” suggests. Gaethje’s gameplan normally is to kick his opponent’s legs then finish them off with a flurry of punches, but he demonstrated knockout power against James Vick.

This seems like Gaethje’s match to lose. Cerrone has more than competent striking, but he needs to be more at kickboxing range. That doesn’t bode well for someone with the pressure and pure danger of Gaethje. The area of expertise for Cowboy is going to be in the ground game, but Gaethje has many years of D1 wrestling. While I don’t see that being much help offensively, the defensive edge that gives him cannot be understated. That combined with his pressure and brutal power makes this a rough match for the veteran and fan favorite.

Take the Shot: Justin Gaethje via Round 2 Knockout

Despite nearing his 40th birthday, Glover Teixiera (29-7, 12-5 UFC) is still a very real threat. He has incredible power in his hands, along with one of the most dangerous ground games at 205 pounds. The key to beating Glover is pretty simple, you need to knock him out or beat him in a decision. Neither is easy to accomplish, especially with someone as fully dangerous as the Brazilian.

Nikita Krylov (25-6, 7-4 UFC) has never seen a decision. I credit this to his gas tank, as he tends to run a bit loose towards the end of the second round. He has a karate style striking stance and uses that to throw out kicks quick and get it to the ground. After a loss to Misha Cirkunov in late 2016, Krylov left the organization. He returned and was submitted in the second round by Jan Blachowicz in the second round. Although the majority (slight) of his finishes come by submission, they aren’t the most technical. He doesn’t have jiu jitsu training and his number of finishes there inflate his ego a bit on the ground.

For all of Krylov’s skill on the mat, if it goes to the ground, this is his fight to lose. I don’t think he has very dangerous power and if anything, Glover will be getting the knockout. The way to victory for Krylov is in a decision, but he has never seen one.

Take the Shot: Glover Teixiera via Round 2 Submission

Antonio Carlos Junior A.K.A. Shoeface (10-3, 7-3 UFC) was on a five-fight win streak before being beaten in decision by Ian Heinisch. Shoeface has expert level BJJ, like the Demian Maia level of shit. On top of that, he has really great wrestling and a gas tank to keep that top notch ground game in full threat through the whole fight. The key to beating Shoeface is to stuff his takedowns and out volume him, but that’s easier said than done.

On the opposite side, Uriah Hall (14-9, 7-7 UFC) is an elite striker and knockout artist. He has the type of one punch power to end a fight at any time, but can be outdone with volume. “Primetime” does have a very linear path to victory, but it’s a dangerous one. He has the type of power to change a fight instantly.

Hall is a dangerous fighter but does lack a developed game on multiple fronts. He absolutely needs to keep this fight standing and I’m not confident he can do that the entire time. With that being said, he has a clear path to victory if he can pressure in, but I see him mainly using the counter in this match to not overexpose himself to the takedowns of Shoeface. Ultimately, when this touches the ground, it will end quick.

Take the Shot: Antonio Carlos Junior via Round 2 Submission

This match is my no-brainer of the night and in my humble opinion, a steal at the current odds. Misha Cirkunov (14-5, 5-3 UFC) was seen as one of the hottest prospects at 205 pounds when he went on a four-fight win streak, but has since suffered three first round KOs.

Jimmy Crute (10-0, 2-0 UFC) is one of the prospects I have my eye on. He has four knockouts and while that may not seem like a lot, he truly has devastating power. He has great cardio and a killer submission game off his back. I see the power ending the fight early, but even if Cirkunov lands a takedown (which he will need to do), Crute has the skills to close it there too.

Take the Shot: Jimmy Crute via Round 1 Knockout

Marvin Vettori (13-4-1, 3-2-1 UFC) is most well-known for being the closest fighter to beating interim champ Israel Adesanya. He has amazing striking and some decent volume, but the bulk of his game comes in with his wrestling. Vettori is more than comfortable with controlling position or taking a submission, which he has done 8 times in his professional career.

An entertaining performance against Marc-Andre Barriault recently got Andrew Sanchez  (11-4, 4-2 UFC) another decision win in the Octagon. He is yet to get a finish, but has okay boxing and movement, along with the right amount of wrestling mixed in. He has never been taken down and can exert his ground game at will, but really relies on position.

I imagine we will see a standup battle between these two primarily ground specialists, where both fighters have more than good enough defense to subvert their opponent’s offense on the mat. On the feet is an entirely different story, however. Sanchez has middling striking where Vettori has the combinations, along with mixing up the shots, that really set him apart, especially in this match.

I was pretty impressed with Augusto Sakai (13-1-1, 2-0 UFC) after his back to back knockouts on the Contender Series and over Chase Sherman in his debut. He was a deceptively quick striker who relied on volume and his gas tank and don’t throw everything into one or two shots like most Heavyweights. Theeeeen, he fought Andrei Arlovski. Granted, he did win in split decision, but he did not deserve that after getting outdone in both volume and power.

Marcin Tybura (17-5, 4-4 UFC) has become a sort of gatekeeper for the UFC’s top 15. He’s a well-rounded fighter with a good amount of knockout power and more than substantial wrestling to back him up. On top of that, he has 6 wins by submission and is never far from finishing a fight.

I don’t ever feel comfortable picking with Sakai after his fight with Arlovski. Hardly anyone has lost to Arlovski in recent years and although there isn’t an L on the resume for Sakai, there should have been. His punches were far too looping and against a less plodding opponent, the supposed speed he has is lost against better movement. On top of that, Tybura has much better wrestling and his skill on the mat should be more than enough to sway the judges.

This foray into the Great White North is quickly becoming a can’t miss card!

Make sure to check out that as well as the prelims picks right here!