The PFL is the only MMA organization with a regular season, playoffs, and championships. There are 6 Men’s weight classes (FTW, LW, WW, MW, LHW, HW) each with 10 fighters and the Women’s Lightweight division with 8 fighters. Each week, fighters match up and fight to earn points, earning 3 for a win and bonus points for early finishes (3 for Round 1, 2 for Round 2, and 1 for Round 3). At the end of the regular season, the top 8 fighters advance on to the tournament playoffs.

This week, the PFL brought us Light Heavyweight and Heavyweight matches for tons of high power and killer matches to enjoy, supposedly. Sadly, that power became a bit of a hindrance in some of these making slow matches that you could miss.

Everything got kicked off to a good start with a killer knockout. Ataev didn’t waste anytime in the striking before dropping Spohn incredibly quickly. There wasn’t a lot to analyze here as Ataev pretty much ended his opponent off the bat.

This was a grind decision where Delija outstruck and outwrestled his opponent to get the victory. I liked how he looked but I’m not sure how his style will fare going forward against the killers this division has in terms of power.

Blechhh. Don’t watch this one. There were some good moments but here’s where I folded laundry. 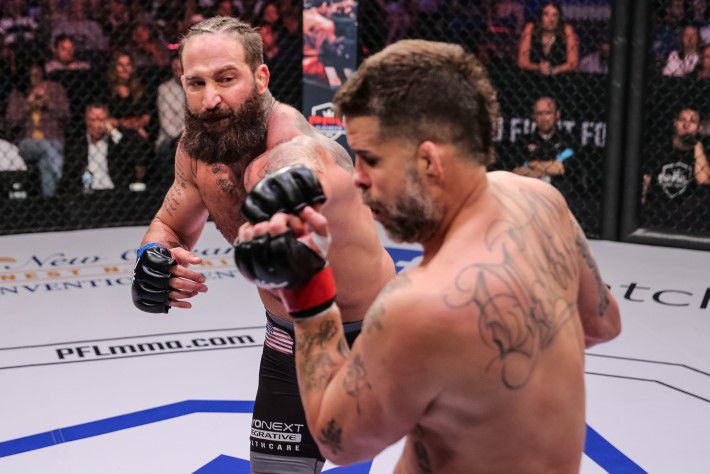 This was a hell of a match. Ultimately, Barroso got it done by using his takedowns and a late knockdown in the third. This was a true war and both fighters carry great skills for the future of this division. I think Barroso has a few elements of his game to clean up but should end up on top if he works on his finishing and ground game more.

Another one you don’t want to watch. Yusupov landed another knockdown in the third, but outside of that, I would rather was Ngannou vs. Derrick Lewis.

Pesaleli stepped up in his young MMA career to challenge a ground expert. Although he came away with the loss, I think he had the better talent and his biggest hindrance was his fight IQ which will improve.

This match calls into question another fun tidbit about PFL. If you miss weight, you get 0 points and your opponent automatically gets points. Even in the loss, Pesaleli moves up in the standings after Market missed weight by 7 pounds. I’m not sure how I feel about that. On the one hand, it does motivate fighters into not missing weight, but then where is the motivation for the finish they always talk about? I would prefer if they have 3 points taken off in a  victory so they are still eligible for that bonus point victory.

This was a clear striker vs. grappler matchup and I wasn’t sure what to think. Cleveland is clearly a beast when he is striking, but on the ground, he gets whooped and very quickly. He will need to round that out if he wants to make the playoffs.

Nemkov looked amazing. His striking was solid and he found his range well. Although he was dealing with a heavy hitter, he kept his pressure going and refused to be bullied by Cleveland. I see potential in the playoffs for Nemkov and he may find success if he focuses more on his striking caliber.

This was brutal. Goltsov ended his opponent with a jab then bumped his head off the canvas a couple times. Truly scary.

Rosholt looks to be the worst HW fighter to me. His takedowns are okay and he is decent in that regard but he entirely got worked over on the feet. He throws the biggest loops you have ever seen in his punches and that won’t hold up against anyone with half-decent hands.

I thought Zeke should have won here. Did Ishii land good shots on the feet? Sure. But the Judo champion was, for the most part, resisted on every takedown attempt and beaten up thoroughly on the feet. I like Zeke much more going forward here. This was his first fight in MMA after three years off of the sport and the impressive showing he had leaves him in good position should he get a win to make it into the playoffs.

I don’t mean to discount the game of Ishii here or say he didn’t do well because he certainly did. He just got cracked more and was never able to entirely secure his opponent on the ground. Both guys are top prospects moving forward and I’m excited for more from both these guys.

Mo-Muscle DeReese came into this match favored and for the first few minutes, it looked like that prediction was for good reason. He was working Tiller over on the feet and even landed a takedown to get Tiller on his back. That’s where things went bad. Mama’s Boy Kevin Tiller put in one of the most vicious kimhra traps I’ve ever seen and I was almost positive he had broken DeReese’s arm.

Congrats to the toughness of DeReese. His striking and ground game were both frightening and he looks to be well prepared for a run at the gold in PFL. Tiller’s submission game just can’t be discounted and if he can actually wake up by the time the fight starts, instead of two minutes in, he will be a serious threat to anyone across the cage.

Emiliano Sordi scares me. The Argentinian slugger came in with a quick knockdown and avoided every attempt the BJJ specialist Magalhaes tried to get him to the ground. The biggest underdog came out victorious by using his power in combination with great precision and footwork to dominate his opponent from every angle.

I think Sordi will win this year. He lost in the final but his power and all-around game is just too good for anyone else I have seen in this division. While I am positive Magalhaes is also skilled, Sordi is just on the next level and I’m thinking he will come out with that check for 1 mill in big ones.

I hope y’all got some fun out of these and these two main events were the best we have had yet. We will back back in early July for the next PFL action.