The UFC’s non-stop show keeps trucking along this weekend with UFC Vegas 8.

The UFC Apex is once again the home for fight night and we have a Bantamweight clash at the top of the marquee, with former Lightweight champion and future hall of Famer Franke Edgar dropping down in weight against the brawling Pedro Munhoz.

Pedro Munhoz (18-4, 8-4 UFC) came out victorious with a knockout over Cody Garbrandt in their one-round brawl. Munhoz has gone under the radar for most people with his quiet and respectful personality, which MMA fans quickly get bored of (looking at you, Conor). Despite that, Munhoz is an incredibly entertaining fighter with power and world-class jiu-jitsu. “The Young Punisher” loves to pressure forward into a brawl, utilizing his fair share of leg kicks. Although coming in with a jiu-jitsu base, his kickboxing is something only increasing in technique and power.

Longtime veteran and future hall of fame Frankie Edgar (23-8-1, 17-8-1 UFC) is making the drop down to Bantamweight, where he believes his natural weight class is. “The Answer” meshes striking with his wrestling game to tire his opponent and wear them down. His gameplan is best when he can execute his wrestling and not have to worry about a counter-threat from his opponent, but he also has a dominant volume with his strikes, as well as fight-ending power, although he has not found a finish since a TKO over Chad Mendes in 2015.

The outcome of this fight is pretty much dependent on one factor: how does Frankie’s speed look at Bantamweight? While it is by no means his only weapon, Edgar’s ridiculous advantage in speed gave him a clean advantage in volume striking, which he blended beautifully with his counters and catch-wrestling. That is simply not a guarantee at Bantamweight, where Edgar will be feeling the draining effects of a full weight cut for the first time, now dropping twenty pounds below his original stomping grounds. That mixed with his recent durability concerns and only finding one victory in his last four bouts over the past two years gives me full confidence in Munhoz’s ability to outstrike the veteran, while his crisp guillotine should keep Edgar wary of wrestling. Frankie does hold an edge in the experience and cardio with a proven ability to succeed in the championship rounds. That should not be too worrisome, as Munhoz’s brawling nature and relentless pursuit will leave Edgar seriously disadvantaged even if Pedro cannot find the finish.

Take the Shot:  Pedro Munhoz via Round 3 Knockout

Ovince St. Preux (24-14, 12-9 UFC) has been around forever. OSP is one of the most experienced UFC Light Heavyweights, taking on the likes of Jon Jones, Shogun Rua, and Glover Texeira. An extremely well-rounded fighter, OSP can knock you at in a second with kicks and also punches. However, his main strength is his ground game, hence the newly christened OSP choke (I never want to hear it called the Von Flue again). OSP has incredibly high fight IQ and fights expertly for a man of his age (37). The most notable advantage for OSP here will be recovery and experience. He can switch his game immediately when he knows he is in trouble and has all the skills to weather a storm and return with his own firepower.

Alonzo Menifield (9-1, 2-1 UFC) plowed into the UFC with an eight-second KO on the Contender Series, only to rattle off two more first round KOs against Vinicius Moreira and Paul Craig. Menifield throws dangerous power, and even a small hook can end the night quickly for his opponents. He does still show the signs of a growing power puncher though, and his gas tank is his greatest weakness, should the fight be extended that long. Still, he has fantastic takedown defense, but overexposes on his power shots and is way too hittable with counters.

I’m honestly more excited about this fight than I was about OSP’s matchup with Shamil Gamzatov, who Menifield replaced on around two weeks’ notice. Menifield’s last fight with Devin Clark was a barn burner, and this match will show if Alonzo can make the requisite adjustments from that fight. Unfortunately, I don’t think this is the match for him. Menifield hunts ruthlessly for the KO, but shows serious lapses even before the first round ends. Headhunting is a bad strategy against OSP, who has only been (T)KO’d twice in his career, with his last coming eleven fights ago to Jimi Manuwa. The length and grappling pedigree of Saint Preux are too great a challenge for Menifield to overcome if he is unable to get that first round stoppage.

Take the Shot: Ovince St. Preux via Round 2 Submission 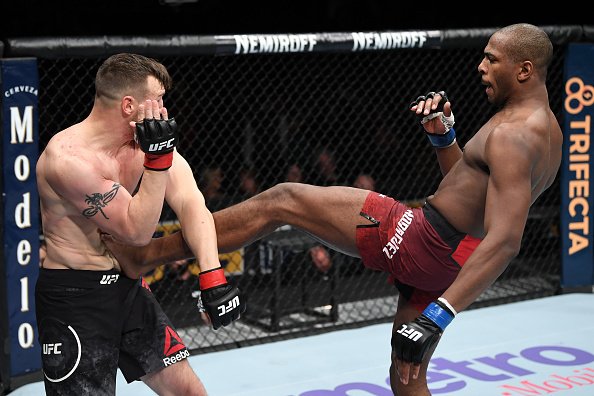 “Slow” Mike Rodriguez (10-4, 1-2 UFC) made his entry to the Octagon after a flying knee victory on the Contender Series. Rodriguez is a power striking utilizing eight-point striking, who hides his quick attacks with slow feints and movement. Rodriguez can close the show in an instant and has great fluidity as well as accuracy. Something I truly love is his use of kicks to keep his opponent in the range he wants them and he has body kicks that make you wince. His bane has been his ground game. Anyone proficient on the mat can stifle Slo-Mike or cruise their way to a decision.

Two first round KO losses make this a must win fight for Marcin Prachnio (13-4, 0-2 UFC) if he wishes to stay in the sport’s top organization. Coming off nearly a two-year layoff, Prachnio is a karate-based striker with ten wins by KO against no shortage of good competition, as he secured four wins and three knockouts in ONE championship. The Pole brings in great movement and genuinely fluid counters, but is simply way too hittable when he enters the pocket. Any competent counter striker can have a field day with Prachnio. His attacks usually come with a full lapse of defense, something that simply cannot be afforded against the quick bursts of Rodriguez when he finds an opening.

Take the Shot: Mike Rodriguez via Round 1 Knockout

A decision loss to Tracy Cortez on the Contender Series cost Mariya Agapova (9-1, 1-0 UFC) cost her her undefeated record, but she bounced back with three straight first-round finishes, most recently submitting Hannah Cifers in June. Agapova has finished seven of her pro wins, four by submission. She utilizes her length to keep the distance and rack up volume with her kicks and long straights, knowing that her scrambling and quick back takes can typically get her out of bad positions on the mat.

Shana Dobson (3-4, 1-3 UFC) is almost certainly fighting for her spot on the UFC roster after coming off The Ultimate Fighter with a 2-1 pro record. “Danger” is a sort of jack of all trades, master of none fighter as she has actually gone for some takedowns, but she has poor takedown accuracy and garbage grappling defense. Her striking is surprisingly crisp, but lacks a lot of power and she mainly throws a ridiculous amount of firepower, happy if 1 of the 4 land. This is about as close to a set-up fight as you can get in the UFC, as Dobson would likely be cut if not for Agapova calling her out. Even taking away Agapova’s massive dominance on the mat, her range and Muay Thai technique spell “Danger” for Dobson (see what I did there?).

Takashi Sato (16-3, 2-1 UFC) most recently stunned with a TKO inside the first minute. over late replacement Jason Witt, getting back on the winning track after a third-round submission defeat to Belal Muhammad. “Ten” holds thirteen finishes, eleven by way of knockout. This is due to his high level Muay Thai and boxing, utilizing a hopping karate stance. Sato likes to pop his jab out there, teasing his opponent into the pocket before unloading with his power left hand. His huge weakness remains his grappling, where he often has difficulty mounting any offense or fighting his way back to the feet when his takedown defense does not hold up.

Although Daniel Rodriguez (12-1, 2-0 UFC) missed out on a contract despite a decision win on the Contender Series, he made a late replacement appearance against Tim Means which saw him earn a standing guillotine choke in the second round. In May, D-Rod secured a division over newcomer Gabe Green, landing 175 strikes over fifteen minutes. Rodriguez has finished ten of his pro wins with six by knockout, but is also a black belt out of 10th Panet Jiu Jitsu, known for their unorthodox techniques and dangerous submissions off the back (Tony Ferguson is also out of 10th Planet). D-Rod tends to push striking exchanges into a brawl, landing nearly nine strikes per minute, confident enough in his skills on the mat that he does not fear the takedown.

I think that this bout could very well be fight of the night, or a devastating finish if not that. This fight should play out almost entirely on the feet, since Rodriguez’s underrated grappling usually comes into play when he is taken down. D-Rod will also come in with the faster hands and crisp boxing fundamentals, giving him a clean technical advantage in almost every facet of the fight. While Sato does have the superior power, the movement, volume, and grappling all go to Rodriguez.

Take the Shot: Daniel Rodriguez via Round 3 Submission

Be sure to check out the six prelims bouts on the prelims, with the likes of power puncher Dwight Grant taking on Octagon newcomer Jared Gooden and Austin “Thud” Hubbard coming off his beating over Max Rohskopf.

If you’re in the need of more MMA content, the Contender Series is firing on all cylinders handing out contracts left and right, promising a new wave of contenders to the ranks of the UFC.