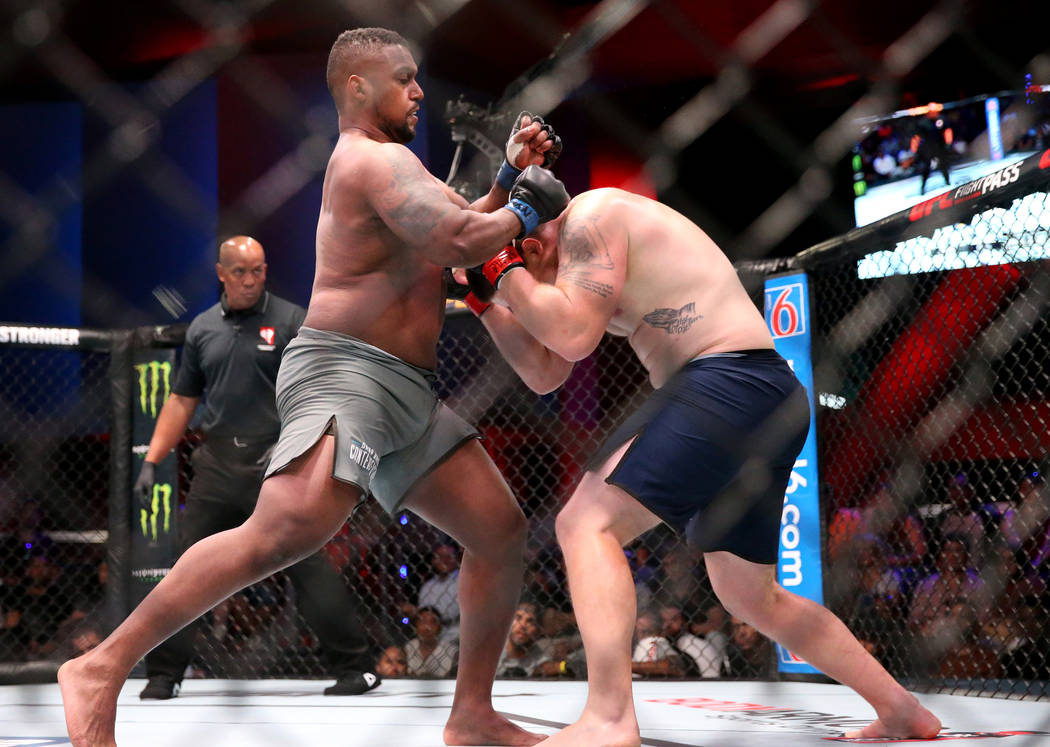 Yorgan De Castro (5-0) impressed quickly on the Contender Series after his opponent’s gas tank miserably failed. The key to this match was de Castro’s takedown defense holding up. Aside from that, he showed those massive leg kicks and a surprising swiftness coming from a man so big was impressive. I liked what I saw from his standup, but I would have liked to see more of his kickboxing take over as I am worried we have just another plodding Heavyweight.

Tai Tuivasa training partner Justin Tafa (3-0) will be getting the advantage of a home crowd here in Australia. The Heavyweight (surprise, surprise) is a power puncher who moves slowly and likes to pick accurate shots. His biggest struggle has been his gas tank, even though he has only been to the second round. The knockout is a must for this fighter, but he has the power to do it.

Both fighters are very green and lacking in the experience department, but it really shows in Tafa. His game is full of holes and is wildly dependent on the knockout. While I don’t have much faith in De Castro yet, I think that he merely has to avoid the power shot like he did on the Contender Series and he will have a pretty one-sided showing.

Take the Shot: Yorgan de Castro via Round 3 Knockout

Coming into the UFC, Nadia Kassem (5-1, 1-1 UFC) had never seen a fight go past the first round. Her knockout power and striking specialty gave her an immense advantage over Alex Chambers in a decision. She shortly fell flat to the grappled of Monatan De La Rosa, but she remains a striker’s delight of power and flashiness that keeps the fight interesting at all times.

Ji Yeon Kim (8-2, 2-2 UFC) has been skirting the line of caution in her stay. She is a volume fighter who is lost on the mat. She lost to Lucie Pudilova (I mean, who does that) and her only victories have been split decisions. Even if she can use her aggression, the power counters of Kassem are simply too much and will drop her early.

Take the Shot: Nadia Kassem via Round 2 Knockout

Aussie fighter and fan favorite Megan Anderson (9-4, 1-2 UFC) came into the Featherweight division eagerly awaited as a talented kickboxer, but has had serious issues since then. She was picked apart by the technique of Holly Holm and her failures in the ground game have been a huge burden to her. Still, she has great kickboxing and incredible power, in addition to some amazing tatttoos.

Zarah Fairn Dos Santos (6-2) will get her first Octagon battle here. She is a fellow kickboxer, this time coming from France with four KOs on her record. She is one of the few women able to rival the 6’0 Anderson in height at 5’10, but mainly relies on sheer size and power instead of technique.

Despite all of Anderson’s Octagon struggles, this seems like another match made for the hometown hero. Zarah does want Megan does but worse, exclusively relying on size. Even in that avenue, Megan has her beat and that’s not even to look at the latter’s much better technique.

Jake Matthews (14-4, 7-4 UFC) has not appeared in the Octagon since his December loss to Rocco Martin. Matthews specializes in his jiu-jitsu, relying more on his grappling acumen than striking, despite four knockouts to go with his seven subs. Matthews has decent wrestling and decent striking, but can falter when outmatched heavily on the feet.

A short notice fight against Sergey Khandozkho gave Rostem Akman (6-1, 0-1 UFC) his first UFC bout. Akman is a power puncher, relying on winging hooks to get all five of his finishes. The Swede has a nice ground game, however, with a heel hook submission and multiple takedowns against his Russian UFC opponent.

This looks to be a fight designed to get the Aussie crowd going. Despite the offensive powerhouse of Akman, his cardio and defensive issues are serious concerns, especially against someone as talented as Matthews is at wrapping someone up. While Akman is live for a knockout, he lacks the technique and experience to go beyond that small benefit.

Take the Shot: Jake Matthews via Round 2 Submission

Check out our early prelims picks and don’t forget to look for the main card predictions!