First up on the docket, I need to address PFL #5. No, I didn’t review it and I just simply didn’t have the time. I will stick to my promise of predicting the tournament matches but the review for that one simply isn’t on its way.

In any regard, this is the week I love the most. The Light Heavyweight and Heavyweight matches (plus one Bantamweight match which the PFL doesn’t have a division for??) throw size and brute athleticism in a night sure to be nothing but highlight reel performances.

This was incredibly intriguing for me as a fan of tactics and technique in a high pressure system like MMA. The freestyle wrestling of Rosholt was really taking control over the 2008 Olympic judo gold medalist. Rosholt was increasingly able to piece up the body and legs of Ishii, which clearly inhibited the ground game and overall movement of the smaller fighter.

Once Ishii’s gas tank fell out, his striking and movement just become disgusting. He was getting tossed around by Rosholt. However, Rosholt had some serious deficiencies in his volume and movement, coming forward without much defense on multiple occasions, rivaling the exhaustion of Ishii.

Ultimately, this shouldn’t have been the main event.

With Magalhaes coming off of two knockouts back to back, one a mere three months ago, I had some serious doubts about him against another heavy hitter. However, he quickly got it to the ground and cut through Cleveland like a hot knife through butter. The submission ace was able to get back to his winning ways and secure a title spot.

As with these quick finishes, there’s not much to gain in terms of future skill, other than the fact that they have that submission skill. Magalhaes remains an impressive favorite at the weight class with his runner-up status and may be able to make another run this year come October.

This was an interesting stylistic matchup. The two world-class wrestlers both came in with a similar gameplan, attacking the opposing leg and trying to outpoint their opponent. Nemkov’s hand speed and occasional takedowns were taking the clear advantage up until the third round, when a heavy right dropped Nemkov. He recovered and rode out the round on the bottom.

This was an interesting fight and I love to see when two ground elites clash and which style wins out. This narrowly got the edge for Nemkov and he will regain his massive ground advantage against the many heavy hitters at 205, but his chin may become a problem with only two months to recover. 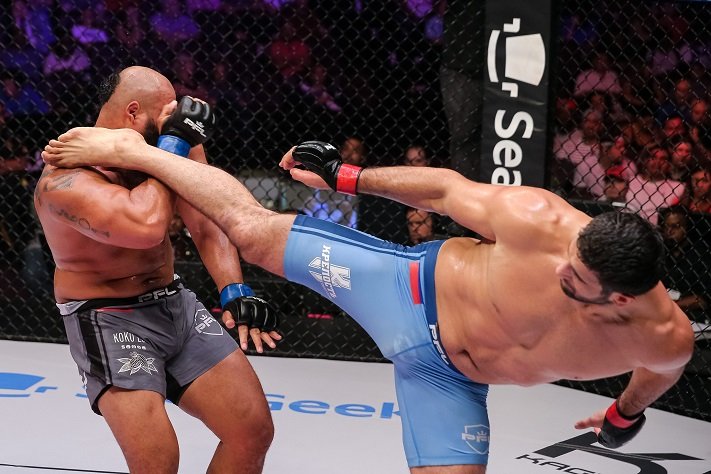 The PFL is pretty much known in the MMA world for having massively inflated betting lines. This one, as far as I know, was actually the largest line ever for an MMA fight with Isaev as the -2400 favorite. For anyone not in the know on how MMA odds work, that means you have to pay $2400 to make $100. Yeah.

The fight showed us why the former Olympian was such a heavy favorite, although those odds can never be justified in my eyes. He pushed the pace on the feet with Carl barely able to land more than single digits. On the ground, he controlled the game and offered a few submissions. However, for that line, I simply cannot believe that this wasn’t as one-sided as it could be, especially with the raw power of Carl. 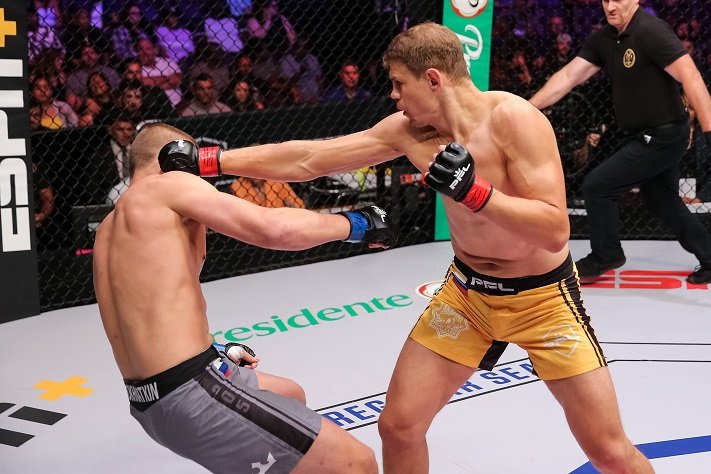 Another elimination bout, another quick finish.

I’m really starting to get the hang of this PFL and Grishin most certainly is with the power right he landed in a blitz moving forward. There’s nothing else to break down because that’s pretty much all there was.

All I want from this playoffs series is Sordi vs. Grishin in the Future CTE Championship.

These guys are quick. Especially for Heavyweights.

Istrefit was really utilizing his speed and volume while mixing in a number of leg kicks. After a solid dick kick, Istrefi came out swinging, to which Mo replied with a swift right and some ground and pound to follow. Even though Istrefi was landing at a slightly higher clip for as long as the fight lasted, I see the speed mixed with power of Mo being a big weapon for him, especially if he can get more of a ground game under him to back up his skillful performances on the feet. 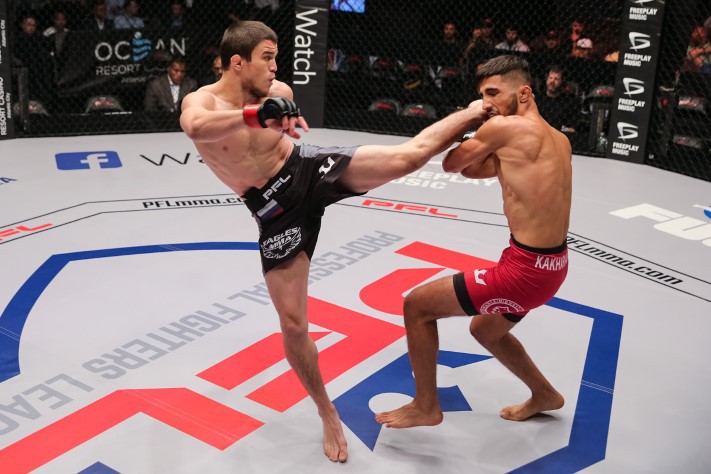 Well, I expect that it is because they are looking to introduce this class, headlined by Nurmagomedov. The PFL did a similar thing last year with Kayla Harrison, giving them a bout in the meantime to get the fighter some cash and ensure they have an upcoming star.

That won’t be a hard task to accomplish with a Nurmagomev. Umar, younger cousin of Khabib (and he REALLY looks like Khabib), was pretty much given a setup fight here. Even the way Umar moves and bobs makes him look just like his cousin Khabib. His striking was better than the more famous Nurmagomedov, firing high kicks like they were nothing, but struggled to get past the high guard of the jiu-jitsu expert in Honorio. Still, it was a dominant performance by the Dagestani setting up a new division for the PFL. 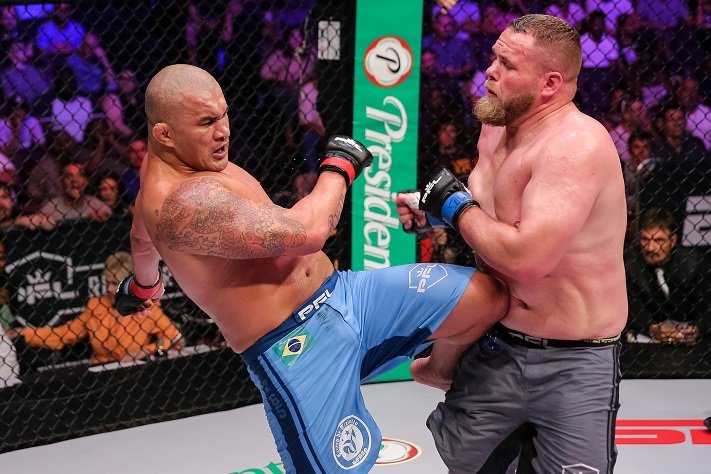 Heavyweight matches tend to go one of two ways. Either we get a highlight reel finish or a slow-paced, ugly battle. This match followed the latter. Other than tarnishing Edwards’ undefeated record, this match didn’t tell me much. The only thing I really got was that the ground specialist could establish better control.

Finally we had some real competition. Tiller was most recently seen in the PFL submitting Mo DeReese with a kimura and Goltsov was coming off a first-round knockout. The tables swung the other way when Goltsov landed a nice takedown and handedly was winning the fight. Tiller certainly had his moments, but Goltsov proved he has the striking and wrestling to get the job done.

With a high ranking in this year’s tournament and a dominant, well-rounded style make him a real threat to any other fighter. He has that classic Heavyweight power along with impressive grappling to edge out the ground specialist in Tiller.

Why does Sordi keep coming in as an underdog? He hits like a truck and that’s all we got to see here. Watch out, LHWs, Sordi is coming for you.

This was a match purely bsased off of steiker’s delight. We didn’t see Nicholson’s prior problems with cardio and ground game addressed here, but a heavy body shot and an overhand right quickly ended the show. The power and speed were the clear difference, but I am still not convinced about the volume of Nicholson. However, the power and movement of Nicholson may never make those a play going forward in a division of Heavyweights that love to trade heavy hands.

This was striking vs. grappling through and through. Sigi Pesaleli was getting off his power and striking, working the legs and body of Johnson well, but was ultimately dominated by Johnson on the mat. It was fairly disappointing, however, as there were times where Pesaleli had opportunities to hop back up, but instead he just laid on his back waiting to accept guard. That might work for jiu-jitsu experts, buddy, but you are not exactly one of those.

Johnson’s wrestling looked good, but ultimately, that was against poor competition in Pesaleli, who was entirely lost on the ground and only in his fifth pro fight. It was very smart gameplay by Johnson and if he relies on his wrestling like this, he may have a real chance to take out some of those high level strikers who don’t have ground experience with his grinding style and wrestling capabilities.

I am so excited for these PFL tournament brackets and you can be sure to hear my predictions by the time October comes around!