The Octagon made an appearance in Sacramento this weekend, culminating in a Bantamweight rubber match and every Team Alpha (#rebrand) fighter ever. 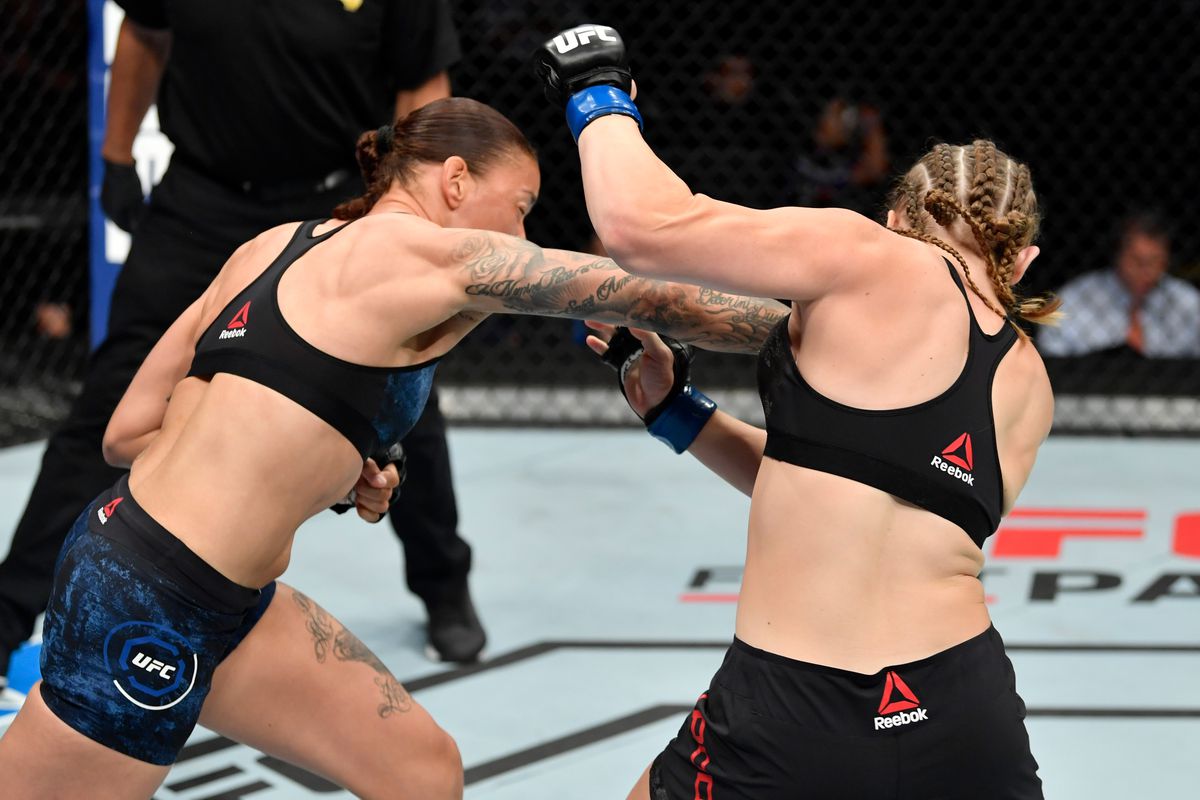 It’s hard to argue that this fight wasn’t stopped early, but it would have ended the same. De Randamie clearly had Ladd hurt and the ground and pound beating that would have followed isn’t something a fighter young as Ladd needs to deal with in what could be a long career.

One of these fighters will be fighting Ketlen Vieira next. I don’t know which, but alternatively, de Randsame will get her rematch with Nunes and Ladd will have a showdown with Holm or some other name to boost her, as that’s clearly what the UFC is going for. 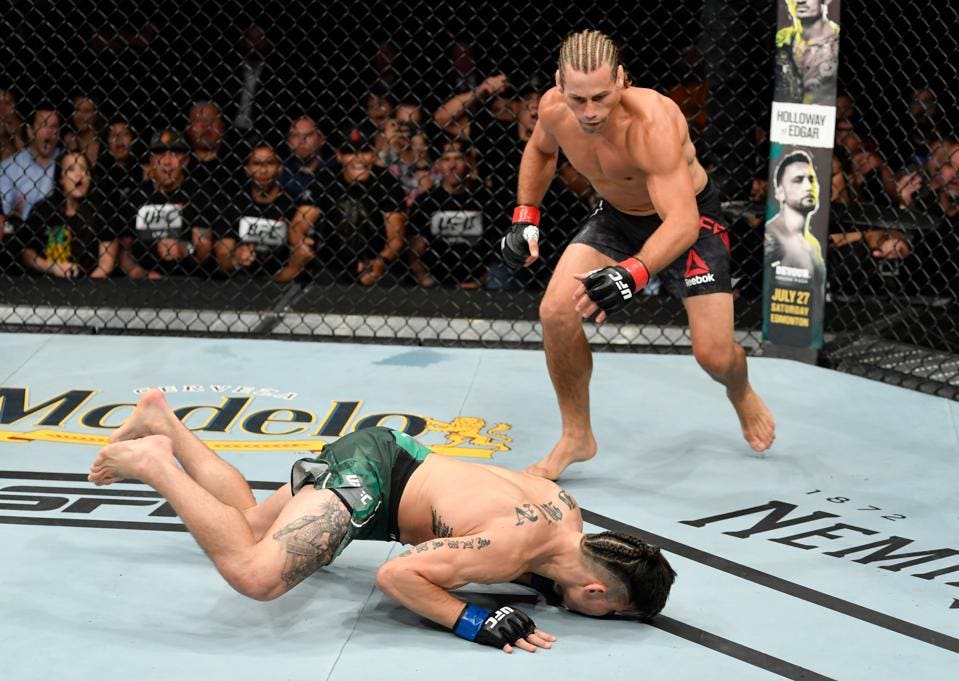 The 40-year-old shocked everyone with his performance (even if it was stopped early) here, showing he can still hang with the best up-and-comers they have as well as demonstarting that Team Alpha counter right they love so much. If he is still looking to tangle with the Bantamweights, a match at that San Fran card with Pedro Munhoz could give him a shot to climb the ranks and show more of the talent that made him one of the biggest names to begin with.

Ricky Simon showed aggression that would mess up a lot of fighters in this division and I believe he is still a future title contender. Even though this didn’t work out, he could build his brand back up with a match against Yadong Song and test himself against the warring fighter and prove he can withstand some damage.

This wasn’t the first time I doubted Emmett’s power, but I can safely say that it will be the last. Prior to this, I thought Emmett’s power only manifested itself in that winging right, but he shut both me and Bektic up with a power jab.

Emmett is looking promising as ever and he deserves a big step forward after two brutal KOs. I think a Jeremy Stephens rematch would be perfect to avenge his loss and also boost his name. Bektic is not out by any means, but he does have a nack for dropping the fights that he needs most. Ricardo Lamas could help him get back on track and probably put Lamas on the road home.

I don’t like either of these fighters moving forward against anyone. The abysmal striking of Turman was a problem here and he also was outgrappled at moments by Roberson, who has failed against anyone remotely skilled on the mat. Roberson looked even worse with his lack of fight IQ and this will be a gold star on their resumes when they inevitably leave the UFC.

This was Vettori’s first match back since his split decision loss to Adesanya and he put on a brilliant performance. I fully expected him to outstrike the chinny asnd aging Ferreira, but to out-wrestle him was a feat in and of itslef. He looked good on all fronts and although his power still isn’t a big threat, his overall skill and gameplan could make him an issue for many people in the striking-heavy 185 division. A match with Tim Boetsch could cement his status in the UFC as a threat and built him up even higher.

As for Ferreira, I don’t like his future. His chin and overall willingness to throw down are huge issues for him. Maybe one more favorable fight to let him leave on a good note.

What a debut! The biggest underdog put on a striking show, able to get in close and outbox the longer fighter. He showed his pedigree on both the feet and the ground, but I have an emphaiss on his striking. Slow Mike may not have much going for him in the future with that performance, but he could rectify things against someone based in striking. However, anyone with a ground game will be able to eat him a,ive.

After hours and hours of debating, I finally stuck with Touchy Fili and I am quite happy that I did. He put on a striking clinic, stunning Moraes and then shutting him out without even needing to use a ground game or superior cardio. Fili is looking better and better with each fight and I want, no, I need to see him against Shane Burgos or Ricardo Lamas.

I was worried for Pena at multiple times, but her wrestling and improving standup were able to make the cut. Montano shocked me with her performance, only boosting my theory about fighters moving up in weight. I am excited for both these women to get back in the mix after their respective layoffs.

For Pena? Let’s see her against Tonya Evinger. Montano is looking great at 135 and I don’t want to see her step down, so a match with Julia Avila could get her a shot to prove her worth and a chance at a ranking in the future.

I was expecting these two to get at it on the grappling side of things, but instead, they just went at it striking. Liu couldn’t handle the pace and volume of Martinez and was continually getting pieced apart until a perfectly placed knee from Martinez closed the show. I loved what I saw from Martinez and he has proved every dimension of his game is on the up and up. A match with Brett J0hns would be a firefight and something I would gladly buy into.

Van Buren showed out with her UFC debut, dominating Souza, someone set to take on Calvillo. She used her wrestling and pressure to dictate the fight. The key was really the unrelenting pressure that made her reach disadvantage not matter with how heavy she was on Souza. It was dominant by all accounts, and her submission game even showed out, attempting the rare omoplata and almost getting it.

She asked for a top ten opponent at San Fran and I don’t see that happening for her second fight, but a match against Cortney Casey could get her the boost she is looking for. Souza is still a dangerous fighter and both these women have a spot in the top 15 by the end of the year.

This was not a good fight. Morales has this problem he does in every fight, where he explodes with incredible pressure and skill, almost finishing his opponent. He did that multiple times here and even knocked Lopez down. He doesn’t keep that up though, and the kicking and distance striking of Lopez was enough to get the job done.

I honestly don’t want to see either of them again.

We had a fun night of matches, as well as a few knockouts! Tune in soon for the prelims for next week’s Welterweight bout!