Another week, another night of future UFC contenders! This Tuesday is no different as we have two big boys facing down as Alton Cunningham gets his second shot after last year’s loss to Bevon Lewis. Facing him will be hard-hitting striker Tony Johnson in a headliner sure to be nothing but violent!

The 36-year-old pro boxer in Tony Johnson came away with the decision because of his power striking where he almost dropped Cunningham on numerous occasions. The first round was absolutely savage and ridiculously entertaining and directly after that, Cunningham went straight to the clinch and we stayed there for a vast majority of the round.

Although I don’t see much of a career for Tony Johnson in MMA because of his age. However, he will be fun to watch no matter how that goes. This match was disappointing after that first round warfare. The clinch work lost and I think there is most definitely a bias that the Contender Series judges have against wrestling, because most judges would have seen that ridiculous amount of control time (more than ten minutes) as a victory for Cunningham.

Gonzales came in with a wild flurry dropping his opponent. After that, he went for the body lock and pushed his opponent up to the fence. Then he would take him to the ground and slowly grapple towards a choke attempt. For the ENTIRE rest of the fight.

Sorry, I don’t mean to make the fight sound shitty. I mean, it was, but still. Gonzales was entirely dominant and there wasn’t a way for his opponent to win, especially for almost exclusively going for the wild spinning shots that Zane did. Against a more technical striker, there may be ways to exploit Gonzales, but he looked incredible on the mat here and I am only excited to see more of this beast of a fighter.

Kyle Daukaus came in getting pieced up a good bit for a minute or so then turned it around in the clinch and the mat. Although only a brown belt in BJJ, Daukaus has all of his six (now seven) wins by submission and it showed. He doesn’t just threaten a RNC or a guillotine, but instead throws up D’arce chokes or all other sorts of hell some black belts can’t even do. On top of that, once the second round got started, Daukaus really started to piece up Lombardo with his boxing. Although his volume got the edge in the first round, it was his power that made an appearance in the second round really damaging his opponent.

It is an absolute wonder that this match went to a decision. Daukaus was soooo close to ending this and if he had just opened up in that last minute it would have been over without question. He showed up in incredible fashion looking good on the feet than ever before but keeping his impressive level of skill on the ground. On top of that, his 6’3 frame made him look like an actual mammoth in there as a Middleweight. I hope to see him come over to the UFC because I love this guy. 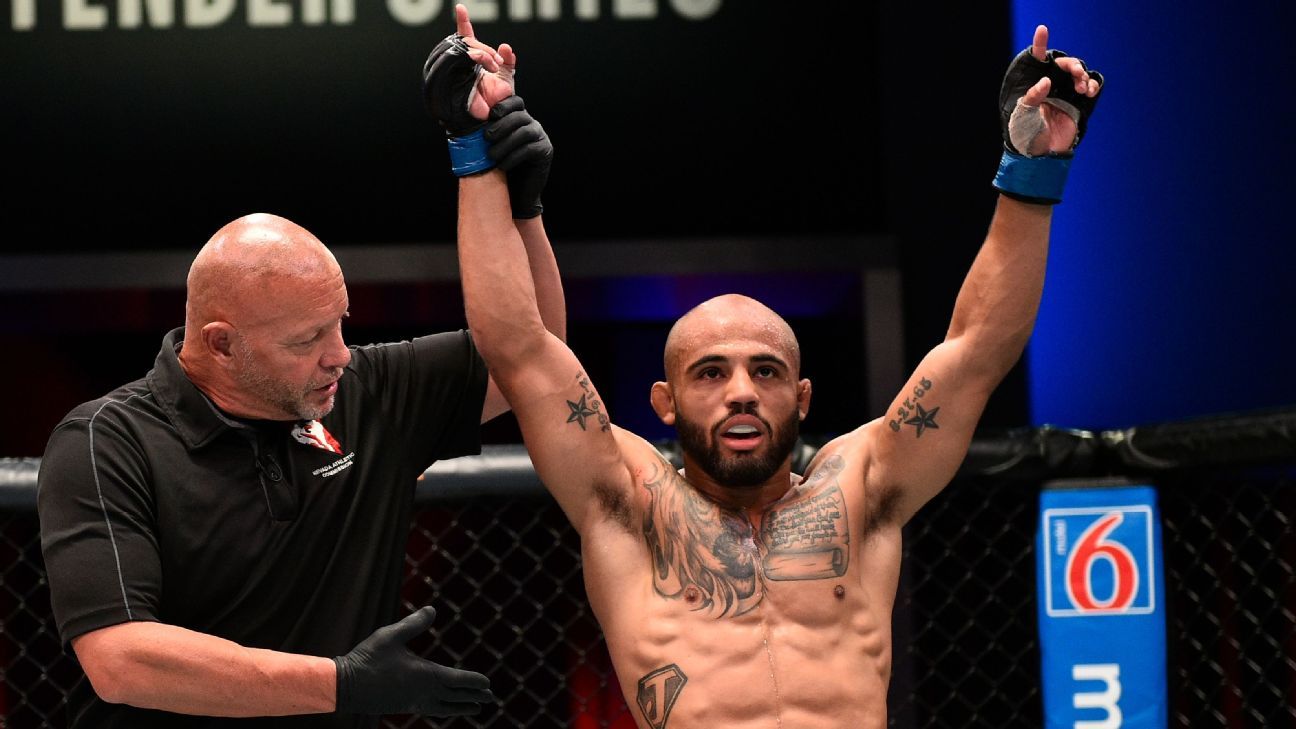 Johns was an absolute threat out there. He built on his wrestling base with some amazing boxing that dropped Santiago multiple times. Santiago, on top of having the worst haircut I have ever seen, has a serious chin and an amazing submission game. Fun-Size Yoel, I mean, Johns kept bringing the fight to the ground, much to the chagrin of his coaches and Santiago had many reversals when Johns got gassed on the mat. Other than that fight IQ, Johns gave an amazing performance and will be entertaining in the future.

One thing I love about Johns is his nickname is “Chapo”. I like it.

Other than that, he is a savage, just like Uncle Dana said. He is a furious and brutal striker but also has incredibly potent wrestling with incredible takedowns. I mean every single one he lands makes you think “Hot damn that hurts”. Miles Johns is someone I think can shake up the stacked land of the Bantamweight division.

Hot damn. Baeza is an offensive powerhouse, kind of like Gilbert Burns. He has brutal power in everything he throws and can put his opponent down with one shot, landing three knockdowns in this fight. He also has a black belt in jiu-jitsu and showed some skill on the ground, although I do believe his best strength is in his striking.

One element that I didn’t like from Baeza was his volume. He didn’t throw many strikes and without the second round knockdowns, he may not have won this. He clearly struggled throwing off punches when Reyna pressured him and Reyna was able to walk him down and lay in shots. That said, Baeza is a dangerous, dangerous man and he poses a huge threat to everybody in the UFC. I see big things for him.

What a fun night we had at the UFC Apex this week. We have a small dry spell next week as International Fight Week will be taking up too much of the boss man’s time. Don’t worry, though, because we will be back again soon. If you missed last week’s results, click here in case you’re jonesing for some more MMA madness.