MMMhmm. 3 weeks with 3 brutal knockouts in the main event. Last night’s UFC on ESPN 2 was a hell of a good night and if you didn’t catch it live on ESPN, you can watch it (or watch it again) on ESPN+. Pretty much every fight (with a few exceptions) were incredibly interesting, even the decisions and there were things for everyone to enjoy from strikers to wrestlers and grapplers.

Alex Perez looked pretty solid in his Bantamweight debut after a 3-1 run in the Flyweights. On the feet, the fight was fairly evenly matched, but once Perez had De La Rosa on the ground, the round might as well have been ended and gone to Perez. The whole match was a story of Perez dominating with his wrestling, while Ol’ Marky was content to throw up submissions from his back and get repetitively shut down. Perez looked very solid as a Bantamweight and I expect to see a lot more skill going forward.

Oof. This one hurt. I was so high on Mazo but Moroz was all over her in the first round. I would say this is an entirely different Maryna Moroz and it only enforces my rule about when fighters move up in weight class. Mazo showed me two major things about her in this fight. The first is that she struggles when pressured. The second being that she is built as a five-round fighter. She made a heavy comeback after a slow start and if this was five rounds, I have no doubt she would have won. The issue for me is that she needs to learn how to fight a more aggressive and faster three-round fight or else she’s never going to get one of those five-rounders. I like what I saw from both these fighters here and I’m looking forward to where they head next.

Quite frankly, this was pure garbage. Kenney fought well, but this was without a doubt Borg’s fight. The striking was too close to call and Borg went off whenever he got it to the ground. Although Kenney had a solid defensive approach, I didn’t see him doing much at all to take a victory like that. Regardless, the LFA double champ should be looking good going forward, especially coming in like that on 6 days notice.

Borg looked a bit small for the division and I’m not positive that he would be better as a Bantamweight. Maybe he just had an off night, but Borg typically uses dominant wrestling and solid striking to take wins. He didn’t seem to have the usual crisp pop of himself, but I am eager to see what happens going forward regardless.

This was the worst fight on the card in my opinion and Kevin Holland’s too. Both fighters threw submissions at each other over and over. Holland took the win on the ground, but it would have been incredibly dominant if he kept it on the feet. When they were standing up, Holland had a very clear edge. After winning, Holland apologized for the anti-climactic performance and promised a banger in his next fight, saying he wants someone who will stand and trade. May I suggest Tim Boetsch?

This was a fight I kept going back and forth on when trying to predict who would win. Ultimately, I went with Barzola on the account of his wrestling. I figured he would use his striking to get close and land some TDs. Well, he tried.

Aguilar dominated with his striking and used his takedown defense in expert style to keep it in his own comfort zone. Aguilar looked incredible in this fight and I saw him coming very, very close to a knockout in some instances if he had just feinted first or tossed a jab to better set up the power shot. I see a lot from Aguilar in the future and he demonstrated excellent fight IQ, which is the true marking of a champion. 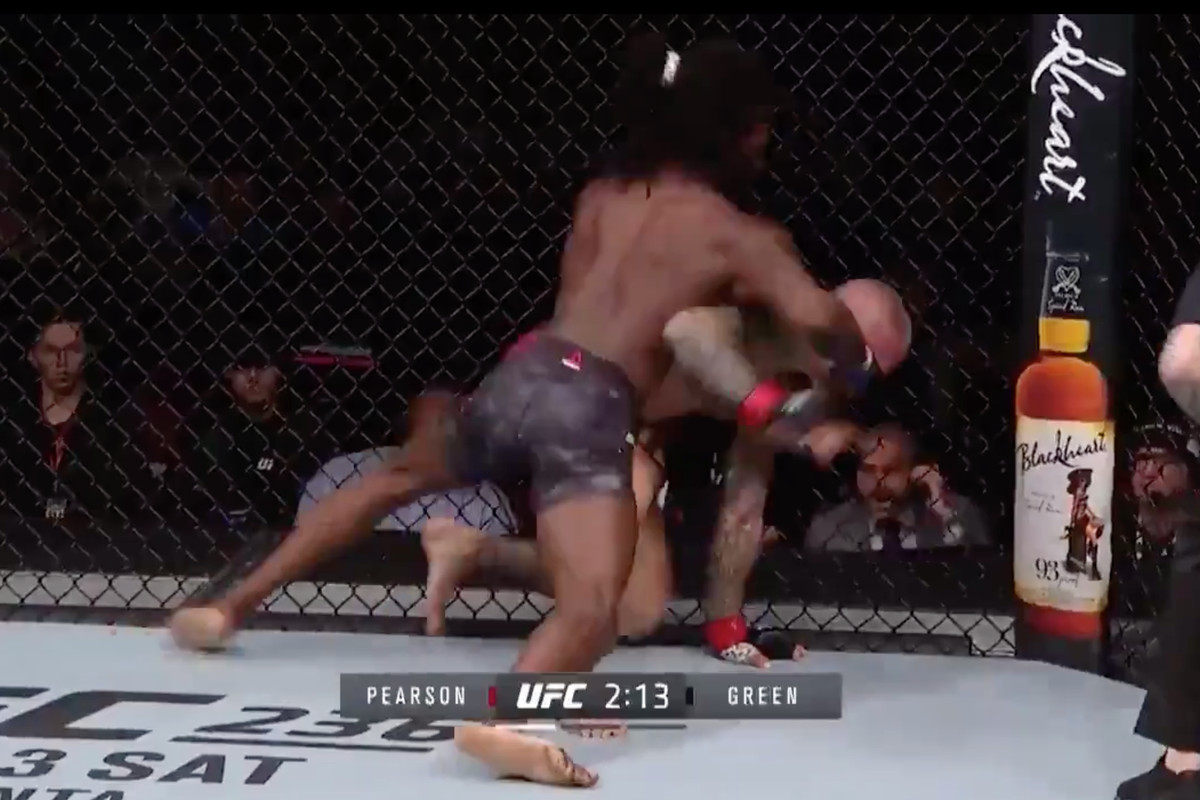 Well, I was dead wrong about Green not having any finishing power. Normally, Green uses his wrestling to grind out a win, but in this match he just clobbered Pearson. “The Predator” took his first UFC finish here in dominant fashion and will be able to use this exciting match as a push towards better fights in the future.

Marina Rodriguez butchered Aguilar. She just hurt her so badly. Credit to Jag for hanging in there and not giving up, but Rodriguez was all over her. Rodriguez used incredible striking and solid ground defense to dominate almost the entire fight. It’s a wonder this fight wasn’t stopped. How about Rodriguez v. Calvillo, Uncle Dana?

Sodiq took the first round which I full well expected. What I didn’t expect was for Sheymon Moraes to gas when he did. Regardless, it was an incredible performance from both fighters. They battled on the feet the entire time and the toughness of both fighters prevailed through moments where other opponents would have dropped. This was an amazing fight and I can see this happening again at a later date when both fighters are higher up on the roster. 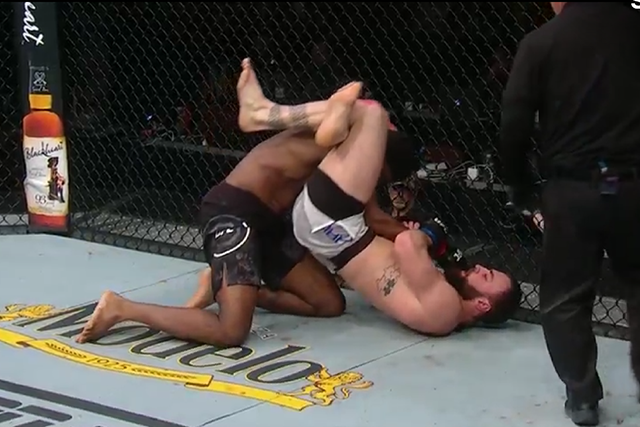 This was just ugly. Both fighters looked bad in there. Craig had the most obvious strike attacks and mediocre takedowns. Yet this kept going to the ground, either because of relentless takedown attempts (look at Craig’s knees) or Nzechukwu’s gross performance on the ground. Kennedy also didn’t seem to have high fight IQ and didn’t carry heavy power here or even listen to his own coaches. I like neither of these fighters going forward. 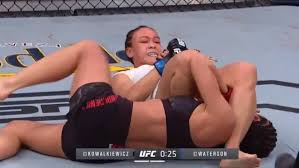 This was so impressive by KK that this fight went the distance. Waterson had one of the tightest armbars ever and she just did some magic flip roll and got out of it. It should have broken her arm, doing that!!

Waterson looked spectacular. She was piecing KK up on the feet and was able to take down THE MOST HIGHLY TOUTED TD DEFENSE ARTIST! She looked amazing and solid all around, but sorry chica. Next title shot should go to the winner of Ansaroff v. Suarez.

For the first two rounds, this fight was very low output. Both fighters were too fast for their opponent’s shots to land and so they danced around each other for two rounds. Then in the last minute, Emmett bombed Johnson and sent his mouthpiece and soul flying. I was not high on Emmett since he said the knockout he suffered last year still affects him, but he showed me wrong. That was incredibly skilled by Emmett to find the moment to throw that shot and the risk paid off big time.

HAHHAHAH! David Branch comes in like “Ima dominate. I got me some new coaches.”  YOU’RE 38, YOU DUMBASS!

Hermansson (a.k.a. Darren Till in ten years) came in piecing Branch up on the feet and taking it to the ground. He finished with his patented special guillotine technique to finish it in the first round. I like Hermansson a lot going forward and I dislike Branch a lot going forward. I think Branch is a bit too old and is way past his peak, while Hermansson seems to have a solid path forward. 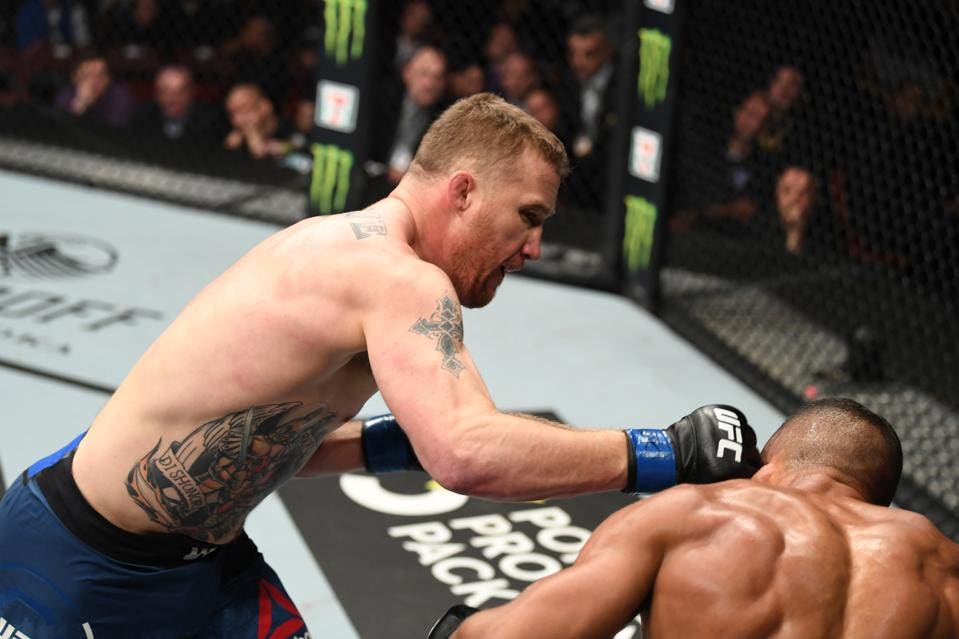 Goddamn, was this fun. This was probably one of the only few fights when I was sad about a first round knockout. This was so much fun and Gaethje’s right connected in under three minutes to send Barboza out cold. While they were trading, their legs were smashing each other. Gaethje’s pressure proved too much for the Brazilian and they were just smacking each other without any defense. Gaethje’s chin held up longer than Junior’s and “The Highlight” took a dominant win.

I would love to see Gaethje fight either Tony Ferguson or Showtime if he comes back down to Lightweight. Gaethje is a fighter who will be around for a long while and I’m confident we will get many more good fights out of him. Although Paul Felder called for Gaethje in his next fight, I’m more intrigued to see the Irish Dragon fight Barboza. Either way, we have solid matches coming for both fighters.

So, there’s no fight next weekend, but it’s all good. UFC 236 is the weekend after that and I will be in attendance at this joyous occasion. Be prepared for much hype in the weeks to come.