We were gifted with one hell of a card last weekend, as a 13-bout card brought ten stellar finishes and a number of great performances, all capped off with a spine-chilling knockout courtesy of Derrick Lewis.

This week, we have another six fight main card to break down with yet another Heavyweight clash, as the powerful Jairzinho Rozenstruik takes on undefeated Cyril Gane. Our co-main event will feature the Light Heavyweights when Nikita Krylov throws down with Magomed Ankalaev. 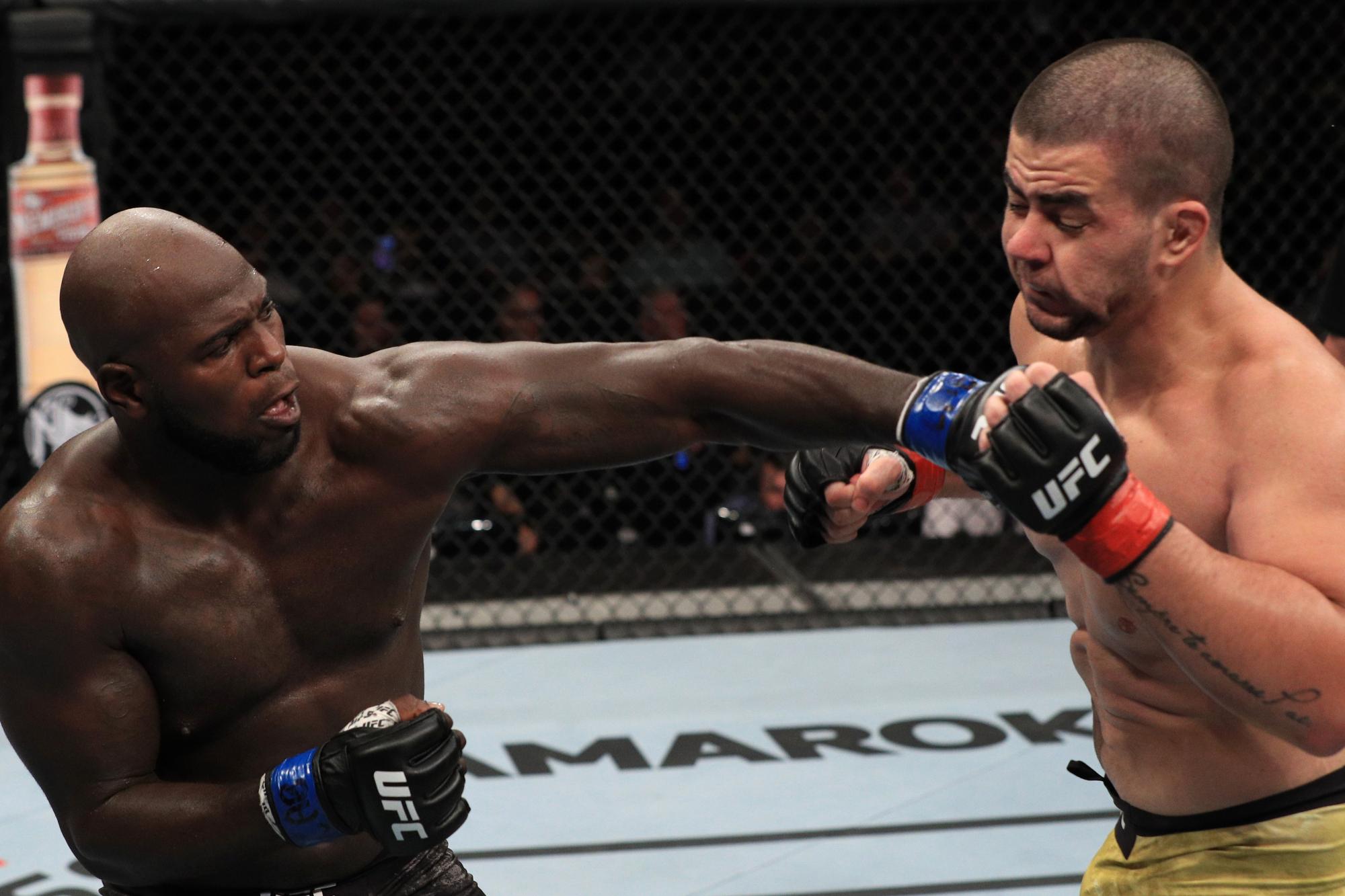 Jairzinho Rozenstruik (11-1, 5-1 UFC) quickly made a name for himself in the UFC after joining the promotion in 2019, scoring four stunning knockouts in the calendar year. A UFC 249 meeting with Francis Ngannou ended in tragedy, but he rebounded by another knockout victory over Junior Dos Santos last August. “Bigi Boy” is a former kickboxer who prefers to keep the fight standing, not yet attempting a single takedown in the UFC. He primarily does his work with his hands and snapping leg kicks, primarily headhunting as he has the KO power to end the fight at any second. Rozenstruik’s advantages often come from his power and speed, but he did show a lapse in defense against Alistair Overeem, both in his striking defense and limited offensive effort off of his back.

Cyril Gane (7-0, 4-0 UFC) has quickly surged through the UFC rankings after just becoming a pro MMA fighter three years ago. After joining the UFC in 2019, he tore through three straight opponents in five months, but then suffered forced inactivity due to injury and COVID-19. His lone bout of 2020 rocketed him towards contention as he scored a second round knockout over the aforementioned Dos Santos. “Bon Gamin” also brings in a professional kickboxing background and has remarkable speed and technique for the Heavyweight division. His clean Muay Thai is devastating, as he utilizes all eight striking points, attacks the head and body, and does expert combinations. He has also gone the distance successfully to prove his gas tank while showing sneaky submission skills over Raphael Pessoa and Don’Tale Mayes.

I have had my eye on Gane since his time on the regional circuit, and he has exceeded my expectations in his short time in the Octagon. While both competitors come in with kickboxing credentials and stellar technique on the feet, Gane is on another level. His movement, constant stance switches, and impressive speed will be his advantages over Bigi Boy here, along with the high fight IQ he has displayed for such a young fighter in the sport. He holds an astounding 73& striking defense rate and has masterful control of range, which will be telling over Rozenstruik, who struggled against the long technical striking of Overeem. Gane also holds the advantage on the mat, with his slick submissions and improving ground game, and he will be able to find success there if he chooses to ground Bigi Boy. Rozenstruik does obtain serious fight changing power, but Gane holds nearly every other advantage in this fight. Expect Gane to put on a striking clinic before grounding his Surinamese opponent and closing the show.

Nikita Krylov (27-7, 8-5 UFC) is always game for an entertaining fight, with all but two of his 34 fights ending in a finish. “The Miner” holds fifteen of his victories in submission and prefers to get things done on the mat, but lacks the technical wrestling game to consistently get it there. He is by no means lost in the striking department, utilizing a karate stance that is incredibly kick heavy to both batter the legs while offering dangerous head kicks, cumulating in eleven career knockouts. Krylov displayed improvements in his cardio in his last bout, defeating Johnny Walker with consistent takedowns and sharp combos en route to his first decision win.

Russian sensation Magomed Ankalaev (14-1, 5-1 UFC) should technically be undefeated, but after a dominant showing against Paul Craig in his UFC debut, Ankalaev succumbed to a literal last-second submission attempt. Since then he has rattled off three straight victories, with his past three being impressive knockouts. Ankalaev has great striking, boasting an incredible 68% striking defense and a fairly constant pressure, earning nine finishes including eight by knockout. On top of that, he has well-timed reversals and clinch skills, making it incredibly difficult to take him down to the mat. He has some offensive wrestling in his back pocket, carrying the tools to mix it up if he is not finding success on the feet.

The odds have Ankalaev as a heavy favorite and I can’t say that I disagree. While Krylov is no walk in the park, Ankalaev has been proving himself as a better and better prospect with each outing. His crisp striking has both volume and power and he has the superior cardio here. While Krylov’s dangerous submission skills pose a threat, he does not have the wrestling pedigree to breach the Russian’s stout takedown defense. Ankalaev will deny takedowns and pick Krylov apart for a late finish.

Montana De La Rosa (11-6, 4-2 UFC) stormed into the Octagon with three straight submission wins, but followed it with a 1-2 skid of all decisions, most recently dropping a competitive decision to #7 ranked Viviane Araujo. Montana is a grappling expert with all nine of her pro finishes coming by submissions. She has dominant top control and prioritizes position until a submission presents itself through wearing her opponent down. On the feet, De Le Rosa has shown consistent improvement between each fight and can certainly handle herself with a skilled jab and solid counter hooks. That said, she still absorbs more strikes than she dishes out, on average, and needs her powerful top control and grappling exchanges to take the advantage.

A first round submission on the Contender Series earned Mayra Bueno Silva (7-1, 2-1 UFC) a spot on the UFC roster, most recently submitting Mara Romero Borella to get back on the winning track. “Sheetara” is an aggressive striker with a well versed grappling arsenal. Her standup is comprised of heavy leg kicks, constant forward movement, and powerful Muay Thai. Silva has a dangerous guard and submission game when grappling, with three of her five career submissions coming by armbar, including one over talented BJJ black belt Gillian Robertson. Her lone defeat was a high paced Fight of the Night decision opposite Maryna Moroz, where Moroz found victory with technical striking, quick movement, and takedowns, though Silva nearly ended the fight in the final round.

This is the bout I am most highly anticipating on this card because of how competitive it is in every aspect of the fight. On the feet, Silva is the more credentialed striker with heavy pressure, but her poor head movement and defense in the pocket leave her open to the long jab and fast counters of De La Rosa. Similarly, on the mat, De La Rosa’s mauling top game and varied submission offense give her an edge, but Silva’s quick armbar transitions and dangerous guard give her a fighting chance there too. I am leaning towards Montana due to her consistent improvements and more well-rounded attack, as she will find increasing success if able to ground Sheetara. I expect a competitive decision that De La Rosa will edge with takedowns and well-timed counters.

Pedro Munhoz (18-5, 8-5 UFC) came out victorious with a knockout over Cody Garbrandt in their one-round brawl. Munhoz has gone under the radar for most people with his quiet and respectful personality, which MMA fans quickly get bored of (looking at you, Conor). Despite that, Munhoz is an incredibly entertaining fighter with power and world-class jiu-jitsu. “The Young Punisher” loves to pressure forward into a brawl, utilizing his fair share of leg kicks. Although coming in with a jiu-jitsu base, his kickboxing is something only increasing in technique and power. On the mat, Munhioz is not much of a takedown artist, but finds submissions with his slick scrambling and iron tight guillotine choke.

Jimmie Rivera (23-4, 7-3 UFC) came back from a thirteen month layoff to outwork Cody Stamann to a decision in July, displaying his stellar takedown defense and slick boxing that brought him to the top of the division before suffering losses to top competition in Aljamain Sterling and current champion Petr Yan. “El Terror” has a wrestling base and does fantastic work on the mat, but often simply uses his background to keep the fight standing. His fantastic fundamental boxing and composed striking give him ample opportunities to light his opponent up with volume, which he uses to soundly secure the victory on the judges’ scorecards. Rivera’s best weapons come with his deadly kicking game as well as lightning-fast hands, making him near impossible to outpoint if allowed to dictate the range and pace.

We are in for a sure fire scrap here. Both fighters have the grappling credentials to keep it on the feet nd work over their opponent with their striking offense, but Munhoz is the one who relies more upon his grappling for the finish. Without the takedown attack to expedite his submission skills against the near-undefeatable takedown defense of Rivera, this fight will be solely contested on the feet. Rivera holds a huge advantage standing with his boxing technique, and while Munhoz might have a power advantage, his reliance upon pressure and shot placement leave Rivera with a clear avenue to victory.

Alex Caceres (17-12, 12-10 UFC) will be looking to extend his longest consecutive win streak inside the Octagon since coming in off the twelfth season of The Ultimate Fighter. “Bruce Leeroy” is about as unorthodox as they come on the feet. He has incredible speed and is difficult to get hands on, in addition to having a grappling game. His struggle is inconsistency and being able to perform against higher level talent, alternating wins and losses all over his record. His best work comes in striking and being able to pound away on his opponent with his speed and length.

A short notice opportunity up a weight class worked wonders for Kevin Croom (21-12, 1-0 UFC) in his UFC debut, as he submitted Roosevelt Roberts in just 31 seconds to earn Performance of the Night. That win got overturned to a no contest due to a positive marijuana test. “The Hard Hitting Hillbilly” lives and dies by the sword, with an astounding 24 of his 33 pro bouts ending before the final bell. He has sixteen finishes on his resume, with ten coming in by submission, but he proved his heavy hands in his debut, as he dropped Roberts before the standing guillotine choke finish. The most alarming hole in Croom’s game is his defense, for while he jumps on any finishing opportunity, it often leaves him exposed.

After a shocking performance in his debut as the biggest underdog on that card, Croom will be looking to replicate his finishing ways after his win was tarnished by the unforgiving NSAC. He certainly has the opportunity to do it with all his offensive tools, but he is getting a tough test in a tried and true Octagon vet. Caceres has the speed and movement to pick away at Croom at range, as well as the superior wrestling chops. However, Caceres’ submission defense struggles are well documented and Croom has all the slick chokes to make it a tough night at the office for Caceres. I see Caceres opening with a strong start on the feet before getting caught in a tight submission.

We are set for a number of high-octane fights, so be sure to tune into ESPN+ this Saturday at 5 PM EST!

As always, make sure to take a look at Coby McKinley’s preview of the prelims, which are particularly stacked on this card!