The UFC is kicking off 2021 with three events over the span of eight days, and after one banger of a card culminating in Holloway vs. Kattar, we will continue to truck on!

This rare Wednesday night card was supposed to have the long awaited match between Leon Edwards and Khamzat Chimaev, but with Chimaev still reeling from COVID-19 symptoms, we are going to have to wait a little longer. Our new main event features a Welterweight collision between two grapplers as Michael Chiesa continues his run in the new weight class up against veteran Neil Magny. We have five other bouts adorning our main card, so let’s jump right in! 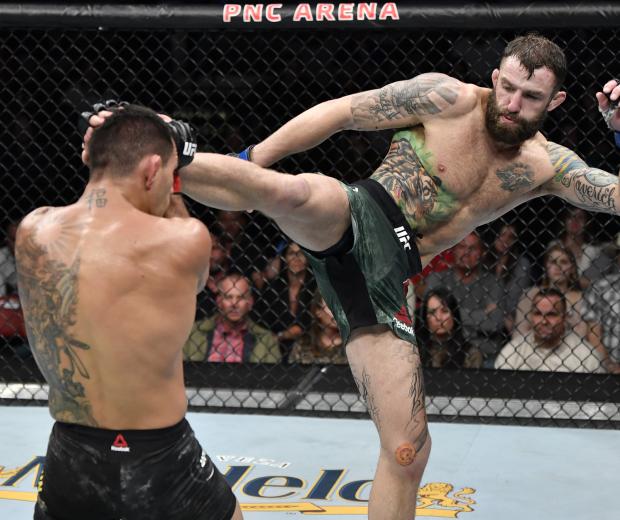 The move up to Welterweight looks amazing for Michael Chiesa (16-4, 9-4 UFC). He looks stronger, faster, and not as deprived at the new weight class. “Maverick” is a jiu-jitsu master and has 11 wins by submission, over some elites such as Jim Miller, Al Iaquinta, and many others. He has numerous submissions from both top position and off his back, and is particularly adept at reversing position on the mat. Chiesa’s striking has never been elite, but he hasn’t needed it because of his high-level ground game. This will be the first bout in over two years where he will not be operating with his typical size advantage. 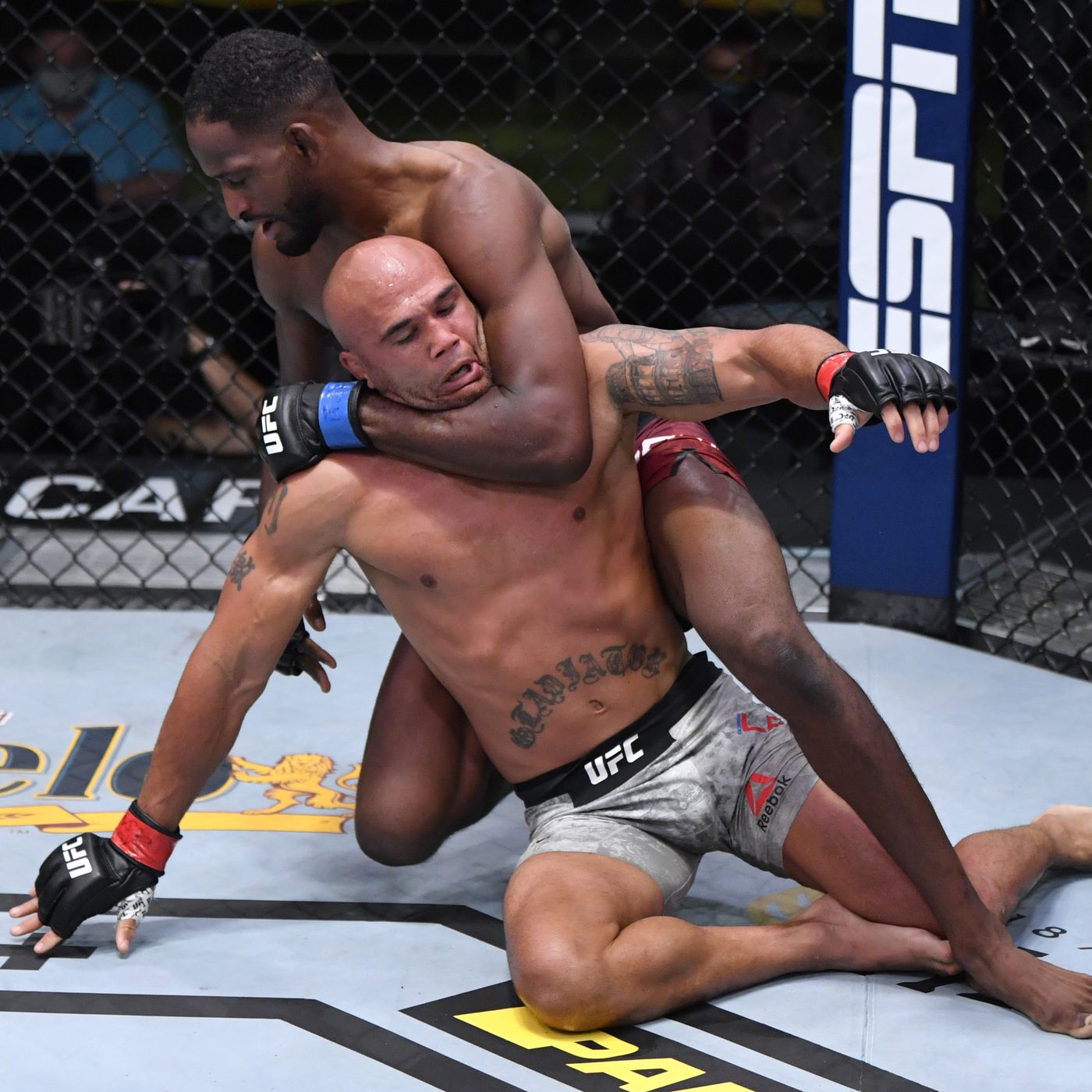 After over a year away from the cage, Neil Magny (23-7, 16-6 UFC) has scored three dominant decision victories over the likes of Li Jingliang and former champion Robbie Lawler, reasserting himself in the Welterweight rankings. “The Haitian Sensation” uses his massive 6’3 frame and eighty-inch reach to outstrike his opponents, using long strikes and expert clinch work to dictate the range at which the fight takes place. Magny also has fantastic wrestling to back him up and a wealth of knowledge at his disposal about submissions, although he clearly favors position.

I am particularly excited for this technical matchup, as these elite grapplers will be paired off against someone with a similar skillset. Both fighters like to use their length on the feet to keep distance before initiating the ground transitions, but differ slightly in their ground attack. Magny is more focused on position and wearing down his opponent, while Chiesa’s slick back takes and submission variety make him the more dangerous finisher. With it so close on the mat, I find confidence in a Magny pick. He holds a much higher volume on the feet, and has the superior length to beat Chiesa at his own striking gameplan. Though Chiesa presents a serious submission threat, particularly in the first two rounds, I see Magny working him over with top position and striking volume for a decision victory.

Warlley Alves (13-4, 7-4 UFC) came in hot off the Ultimate Fighter and put up a four-fight streak, while also handing Colby Covington his only loss. He has since trading wins and losses every few fights, most recently being submitted in the second round by Randy Brown. Alves has one of the most dangerous guillotines in the sport and is more than happy to wrestle his opponent to a spot where he can snatch it up. His striking isn’t the worst but is a bit more winging than I would personally like. Though he does pack some knockout power from those wild punches, it isn’t reliable power. 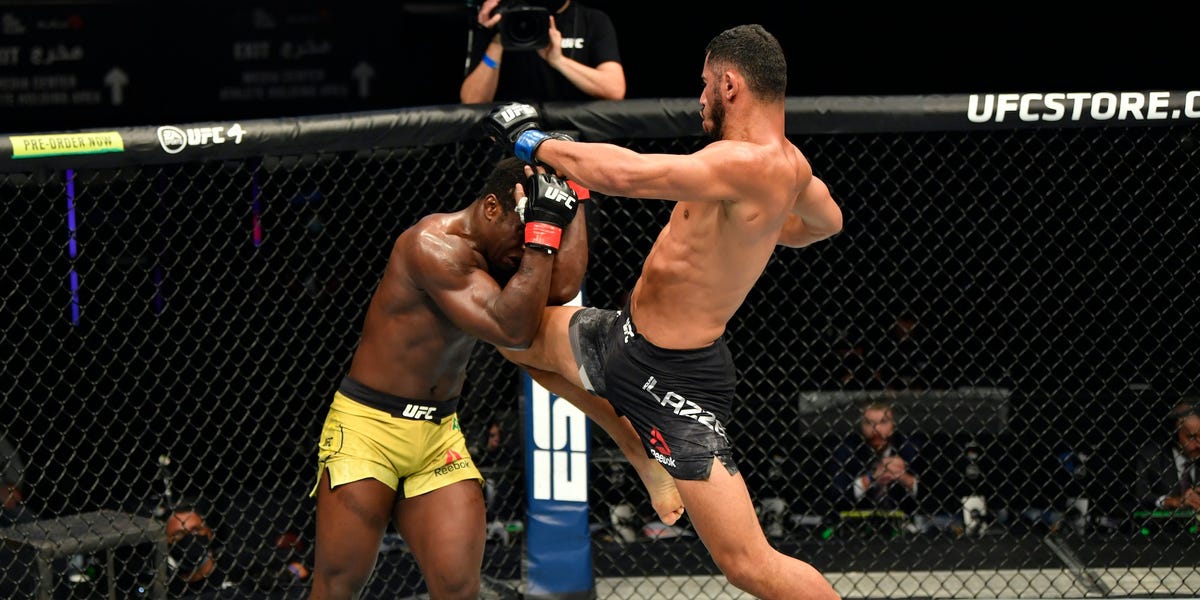 Mounir Lazzez (10-1, 1-0 UFC) made his UFC debut as a hefty underdog opposite Abdul Razak Alhassen. The two put on a Fight of the Night earning scrap in a decision that saw Lazzez get his hand raised. “The Sniper” is a lengthy striker who looks for precision shots from kickboxing range. He has had great success with his sharpshooter-like knees and punches, finishing all but two of his victories by knockout. Lazzez has shown some weakness in his wrestling defense, but has only really seen that exploited by BRAVE CF standout Eldar Eldarov. His kickboxing technique is second to none, as he utilizing a diverse eight-point striking style with skilled defense.

Lazzez seriously impressed me in his Octagon debut, taking the best strikes of the powerhouse in Alhassen before delivering his own strikes Ito show off his diverse skillset. His boxing technique was exemplary in that bout, and his fight IQ was shown to be plenty high, covering up well whenever threatened on the feet. Alves presents a much different challenge, as he will test the grappling pedigree of the much less experienced Lazzez. Still, should the Emirate be able to negate the so-so wrestling of Alves, his lengthy striking and distance management will see him roll over Alves for his first knockout win in the UFC.

A short notice debut at Heavyweight got Ike Villanueva (16-11, 0-2 UFC) to the big show, but he is still hunting for that first Octagon win. A brawler with thirteen knockout finishes to his name, Villanueva’s style is best described by a kill or be killed aggression, as he pushes into the pocket to find success with his boxing. “Hurricane” leaves something wanting in terms of his defense. He has been finished in all but one of his losses, and his takedown defense rate is by no means remarkable.

That will likely be an issue against Vinicius Moreira (9-4, 0-3 UFC). “Mamute” is a high level jiu jitsu black belt with eight submissions on his resume. After earning his UFC spot with a second-round submission in the Contender Series, he has been brutally finished in all his UFC appearances. He has some of the worst striking I have ever seen in my life, and that’s not an exaggeration. Still, on the ground, he is a pure killer. He holds every victory in finish, with 8 of those coming from submission.

This is a pretty sloppy fight that is difficult to predict, and I did not think I would see it on a main card, yet here we are. Both fighters have a path to victory still, and they’re pretty equally likely. If Villanueva can keep the match on the feet, not even necessarily for long, he will quickly find success on Mamute’s exposed chin. However, on the mat, Mamute will have little issue slicing through his opponent’s guard and finding the submission. I admittedly am making this pick with very little confidence, but I lean towards Mamute. Competing against a higher level of opposition and with a higher technical background, he should be able to find the finish if he can get the fight to the mat quickly.

Roxanne Modafferi (25-17, 4-4 UFC) has proved that she is still making improvements to her game, despite being a veteran of the fight game since 2003. “The Happy Warrior” has become a personality endearing to hardcore fans, and has scored two impressive upsets in just over a year. Modafferi uses wrestling in combination with her awkward volume striking, and although she isn’t the most finish-heavy fighter, she’s hard to put out. Modafferi is best when able to control top position and unleash ground and pound, loving every opportunity to control punishing strikers. She has twelve finishes across her career, split evenly between knockouts and submissions.

Viviane Araujo (9-2, 3-1 UFC) ran through Talita Bernardo in her Octagon debut, finishing her opponent in the opening of the third round. The usual Strawweight has made her permanent home at Flyweight after her Bantamweight debut (yeah, that’s a tongue twister) and her power may see a decrease with that drop, but the wrestling and striking clinic she has proven able to put on will still stand. She has fantastic defensive grappling, as well as stifling top control, putting together crisp combinations on the feet along with speed to dominate her opponent in every area. Her issue so far has been her pacing and gas tank and tends to slow down in the third round. Araujo’s defensive grappling ability will leave her able to dictate where the bout takes place and she can press her advantage, particularly on the feet, from there.

Tyson Nam (20-11-1, 2-2 UFC) made the most impactful run of his career in 2020, earning two knockout victories under the UFC banner. Though Flyweights are rarely thought of as true knockout threats, Nam has demonstrated his one-punch KO power time and time again. His power mainly lies in his right hand, and his technical boxing and crisp jab exist to create opportunities for that power right. He is not lost on the mat, as he has never been submitted in eleven defeats and has an impressive takedown defense rate, but certainly wants to keep the fight on the feet. Though he does eat plenty of leg kicks and relies too heavily upon his power, he is a fearsome striker inside the pocket who can close the show in a split second.

After making his first appearance to UFC fans through the 24th season of the Ultimate Fighter, Matt Schnell (14-5, 4-3 UFC) lost his first two Octagon bouts, only to rebound with a four fight winning streak. Though his success was interrupted by an overhand right from Alexandre Pantoja last December, Schnell made his mark on fans with an aggressive style and finishing ability. Holding nine of his professional wins by submission, Schenll is a capable grappler with mediocre wrestling and striking. His quick boxing is somewhat outdone by the amount of shots he absorbs through his lackluster striking defense. That said, Schnell is a truly game fighter with quick finishing ability and sharp technique, though lacking in his defensive approach.

For all of Schnell’s superior grappling, he often lacks the wrestling to take the fight into his preferred arena. This will be increasingly obvious come Fight Night, where Nam will have a field day on the feet against the range-reliant Schnell, finding success with his combos inside of boxing range. On the mat, Schnell does hold a considerable advantage, but I find it unlikely that he can wrangle the fight there, given his so-so takedown pedigree and Nam’s ever-potent defense. Look for Nam to negate the early takedowns before opening up with his power combinations.

Though given some extremely tough matches in his first two Octagon appearances, Lerone Murphy (9-0-1, 1-0-1 UFC) has remained undefeated. “The Miracle” most recently finished Ricardo Ramos in the first round with hellacious ground and pound, culminating in his sixth career knockout win. Murphy’s best skills are on the feet, utilizing his quick hand speed and boxing technique in combination with his power. Though he was taken down a number of times in his debut, he has shown improving defensive wrestling and a savvy for reclaiming his footing quickly.

Douglas Silva de Andrade (26-3, 4-3 UFC) made his Octagon debut on the heels of a 22-fight unbeaten streak over under qualified competition. That said, he has gone up against some real killers in his UFC tenure, proving that his high octane striking can yield positive results. Most recently, he got a unanimous decision win over former Bantamweight champ Renan Barao, using his power striking to damage the skidding Baron. “D’Silva” has nineteen career knockouts, including a highlight reel spinning backfist over Henry Briones. Though Andrade does hold more experience and a more proven ability in the UFC, his sub-par striking defense and surging aggression bode poorly up against the slick power combinations of Murphy. Expect an aggressive first round with Murphy taking over late in the bout.

This card will be kicking off at 9 AM EST on Wednesday, so be prepared for an early morning (or late night).

As always, make sure to check out the prelims predictions, broken down by Coby McKinley!