We are back at the UFC Apex facility in Las Vegas for another Fight Night card, and despite some cancellations due to, well, everything going on right now, it looks to be fireworks.

Our main event pits the returning Thiago Santos against veteran Glover Texeira, who believes he can make it back to the title. The rest of the card is no slouch, as we also have a killer bout between Ian Heinisch and Brendan Allen on deck, along with a number of prospects like Xiaonan Yan and Raoni Barcelos! 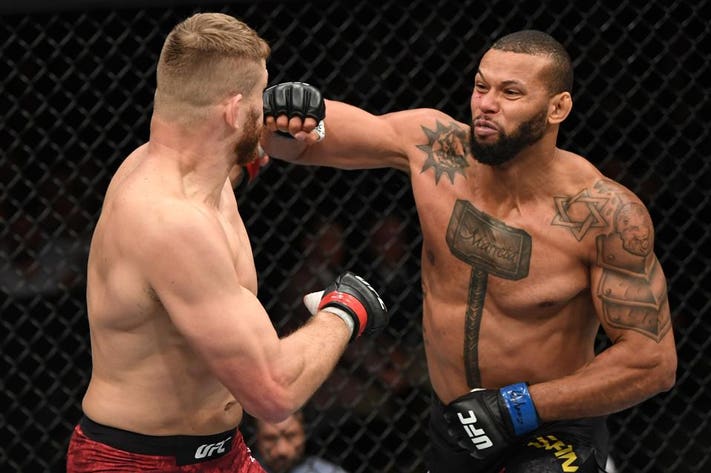 In the infamous words of Joe Rogan, “You don’t get a hammer tattooed on your chest if you’re not serious”. Thiago Santos (21-6, 13-5 UFC) is a psychopath inside the cage. “Marreta”, which means sledgehammer, has power in everything he throws and comes in throwing hot from the very first bell. Santos started MMA with capoeira training, a Brazilian dance-fighting style that is populated by spinning kicks and the like. Very entertaining stuff. Santos uses those exact types of kicks to hammer (heh heh) home ruthless power shots and uses all sorts of kicks just as much as punches in order to get the job done. This will be his first bout in over a year due to injuries sustained in his last bout, a split decision loss to former champion Jon Jones.

Perennial contender Glover Texeira (31-7, 14-5 UFC) has proven he is still in fighting shape, coming off four straight wins including a domination of title challenger Anthony Smith. Texeira has a terrific jiu-jitsu and grappling base that he uses to implement control. However, don’t think that is all Texeira brings, as his stellar boxing and iron chin bring his total game together. Glover is a dangerous fighter in all areas and has immense skill for implementing ground control. However, he has struggled against fighters also able to mix it up well.

This a killer bout in the resurgent Light Heavyweight division, likely setting up the next challenge for the belt (unless Adesanya has any say in the matter). Santos will be looking to keep it on the feet and exploit the decreased agility of the aging veteran. However, his lackluster takedown defense opens up some avenues to victory for Texeira, who will find himself at a clear advantage should he secure the explosive Marreta. I like the striking advantage to make the difference here for Santos, whose range management and affinity for surging power shots will keep Texeira from establishing his own offense on the feet. So long as Santos can avoid the sloppy takedown entries that Glover has had issue executing in recent fights, he will add another knockout to his highlight reel.

Former champ Andrei Arlovski (29-19, 18-13 UFC) got his career relatively back on track in the past two years, now coming off a win to Philipe Lins. The 41-year-old showed up well against the hard hitting Augusto Sakai, making the fight a split decision by landing good shots and showing people why he became the champ in the first place, as well as proving his chin is not shot. Despite dropping quite a few fights as of late, Arlovski is still a true fighter. He has incredible speed with his hands and can unload a good deal of volume, as well as having a dangerous overhand right that he has favored a lot in his recent matches. 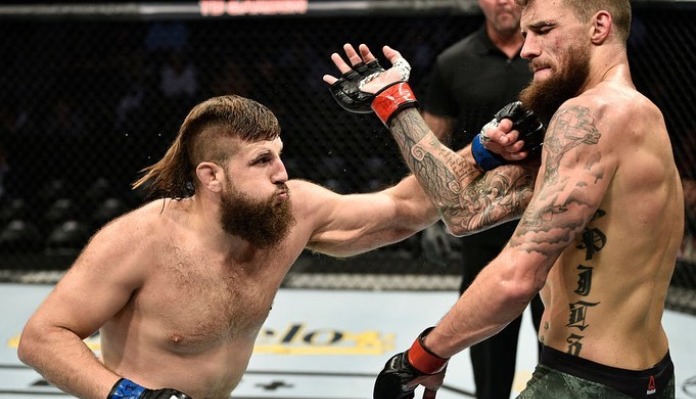 Tanner Boser (19-6-1, 3-1 UFC) came into the UFC with a decision win followed up with another fifteen minutes opposite top prospect Ciryl Gane, this time in a losing effort. He has made a name for himself as a true prospect in 2020, however, earning two knockout victories over Philipe Lins and Raphael Pessoa. “The Bulldozer” does his best work when striking, relying on his incredible leg kicks and takedown defense to keep it on the feet. Some main features of his game are his karate stance and expert movement, with his speed almost always being a key advantage for him. He has been able to be beaten by fighters who shoot at him with explosiveness and negate the leg kicks and volume he throws in.

This clearly seems like Boser’s fight to lose. While Arlovski still has real power and has shored up his technical striking and volume in recent fights, he is on the wrong end of a number of key factors. His speed cannot compete with Boser and his traditional plodding style with get picked apart by the leg kicks and movement of the quick Canadian. I see a clear decision win for Boser to vault him up the rankings.

Raoni Barcelos (15-1, 4-0 UFC)  has been nothing but dominant in his Octagon tenure, securing three finishes and most recently securing a decision over Said Nurmagomedov. Barcelos has a fantastic ground game with skilled wrestling, but does not always need it as he has eight wins by knockout. He combines elite combination striking along with nice submission chops and the cardio to go through five-rounders multiple times.He has immense success on the mat shoring up submissions, but also has advancing and power to score a knockout.

German bruiser Khalid Taha (13-2, 1-1 UFC) had a disappointing debut, but quickly made it up by knocking out Contender Series prospect Boston Salmon inside the first round. He most recently had his third round submission victory over Bruno Silva overturned to a no contest due to a failed drug test. Taha is a power striker with 9 knockouts on his record, using his compact 5’5″ frame to close distance and land bombs. Taha does have poor defense in almost every key area, however, able to be out volumed as well as disappointing output on the mat.

The key difference in this fight will be the usage of defense. For all of Taha’s explosiveness and fight-ending ability, he can be picked apart at range. This is most troubling for him due to the quick jab and higher volume of Barcelos, who will be able to easily outpoint him. On top of that, the Brazilian holds a MASSIVE edge in grappling ability and will have little issue exploiting Taha’s shoddy takedown defense, leaving Taha reliant on the knockout to earn a win.

Ian Heinisch (14-3, 3-2 UFC) broke a two-fight losing streak with a destructive first-round KO of Gerald Meerschaert. He has seven finishes, five by knockout. “The Hurricane” brings in a diverse offensive arsenal, with powerful bursts on the feet and a proven ability on the mat. In terms of offensive wrestling, Heinisch isn’t the best, but he has the scrambling ability of a Flyweight and is difficult to hold down. His striking is powerful and he utilizes that eight-point striking style to great success, using his timing and footwork to nail crucial shots.

A first-round submission on the Contender Series gave way to a UFC contract for Brendan Allen (15-3, 3-0 UFC), with which he has racked up three straight Octagon wins, including two finishes. Despite only being a jiu-jitsu brown belt, Allen has morphed BJJ beautifully into his MMA game and much prefers to get the fight to the ground. For good reason, too. He also has aggressive striking, pressuring forward and throwing heavy shots, which he used to knock down Kyle Daukaus in his last bout. However, he has displayed some pretty poor defense when striking, so he prefers to roll on the mat using his top-notch scrambling ability and reversals to find his way to the finish.

This is the fight I am most excited for on the card, as it is a closely contested fight on paper, which the even money odds reflect. Allen is a particularly adept grappler, but lacks some of the wrestling to secure it there, especially against Heinisch. He will have difficulty holding position against the wrestler, whose scrambling ability will keep him from being immediately rolled over on the floor. That’s not to say Allen will not have the opportunity to find success there, I just don’t believe he will be able to keep it there. On the feet, it’s a whole different ball game. Heinisch holds the clear technical advantage, especially in striking defense, where Allen’s high chin has seen him get clipped by a number of shots. I see a competitive decision for Heinisch, who will secure victory using his superior striking volume and sneaky reversals.

Claudia Gadelha (18-4, 7-4 UFC) has been at the top of the Strawweight division since its inception and has proven herself as a divisional staple. With a fantastic wrestling base and a few submissions to pad her record (5 of the 7 have come by armbar), she has really filled up some of the holes in her boxing and developed a well-rounded style on both the mat and the feet. “Claudinha” has put together a boxing game that, in combination with her wrestling, can dominate a decision win if she can’t find a sub. The repeated issue for Gadelha has been her gas tank, as her high striking pace and aggressive ground control leave her output lackluster in the last round.

Yan Xiaonan (12-1, 5-0 UFC) has been nothing but dominant in her Octagon tenure, churning out wins over the lines of Karolina Kowalkiewicz and Angela Hill. “Fury” fights just like her name suggests, pressuring her opponent and using one of the most relentless paces I’ve seen in the Octagon. She has one of the best sidekicks outside of Joanna Jedrzejczyk, and puts on an INSANE 6.72 average strikes per minute. She has some pop in her hands too, scoring five knockouts in her career. Although she still has not gotten a finish in the UFC, she has certainly busted up each opponent unfortunate enough to get thrown in the cage with her.

This is another close fight, but one that I think will go in the typical Gadelha style. She will blitz as usual and likely tire out in a contentious second round, giving up the third. Her subpar striking defense will be far too easily exploited by the relentless workhorse in Yan, who will take over the match on the feet pretty early. What convinces me for Yan here is her grappling improvements over her last few fights. She has demonstrated great takedown defense, a necessity against Gadelha, as well as landing five takedowns on Kowalkiewicz in her last bout. In short, Yan banks the later rounds to take home her sixth decision win.

Keep an eye out for the prelims predictions, taken on by Chris Carpenter, and make sure to tune in to this great event on Saturday!