The PFL organization is much larger than last year with all 4 champions and $1 million winners coming back for a second time. Each card is only 10 fights (5 on ESPN+ and 5 on ESPN2). They focus on two weight classes each night and on this night they went with the Welterweight division and the Women’s Lightweight.

Sarah Kaufman’s scheduled fight will not be taking place due to her opponent missing weight and received three points, putting herself at a guaranteed one seed, unless Kayla Harrison wins within 2:20 of the first round. 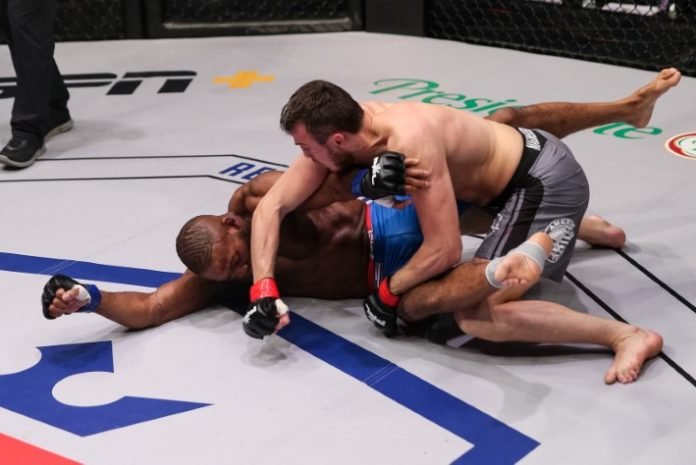 The former Welterweight champ showed why he got that designation once again with his elite wrestling and powerful striking ability. His kicks were heavier in this match, but he actually showed a flaw in his game:cardio. Magomed tired about halfway through the third and got sloppy with his striking, allowing Curtis to make that fight close and with a boxer like Curtis, that can be dangerous.

Both these fighters were secure in their playoff spots, but the way that things shook out tonight, these two will be facing each other once again in the first round of the playoff bracket. With the dominance showcased here, I feel like Magomed will once again get a win, unless Curtis can solve the puzzle that no one in the PFL has yet to be abkle to. 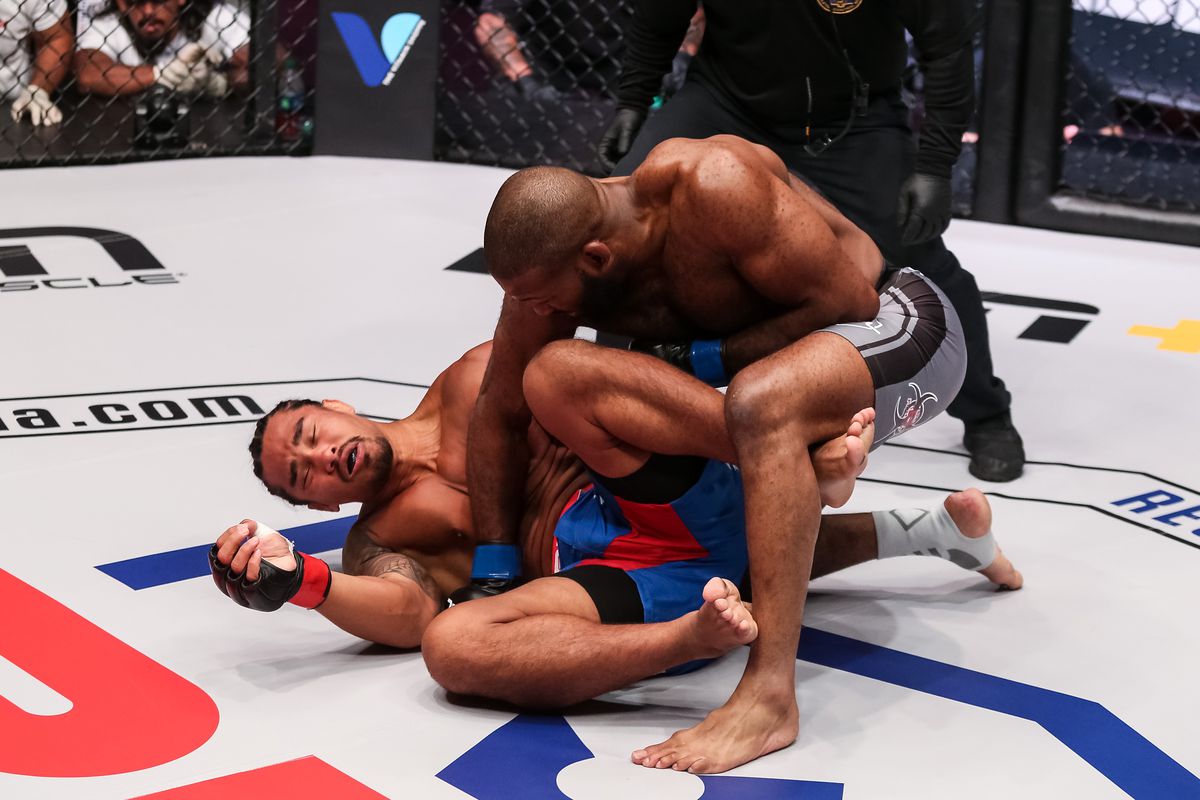 Kayla Harrison ran straight in and passed guard a few times before sinking a keylock submission. Frier had some good showing, but the striker had a limited arsenal against the gold medalist. With this win, Harrison secures the #2 slot in the playoffs to face Genah Fabian.

The judo game of Harrison has not been underrated, but it really is ludicrously dominant over someone not skilled on the mat. We still did not see much of her striking, but the dominant judo is good enough to make her a very real threat and sure to be heavy favorite for the playoffs.

The first round of this match was a one-sided showing for the most part, with Zeferino outstriking Velickovic then out-grappling him too. Zeferino showed incredible accuracy, but wasn’t able to match the volume and cardio of Bojan. He turned it around in the third round in a round that was looking to make the difference for Bojan and took the back, but ultimately not enough for either ot make the playoffs.

Two brutal left hooks put Cooper to sleep after a brief wrestling start. Howard’s power in his counters really showed out here and damaged Cooper, then he used the right fight IQ necessary to close the show.

This was the most powerful knockout of the night and it really showed with the necessity that the PFL puts on its fighters with the playoff style. Both fighters will make it into the playoffs, but I have to assume the low break of three months won’t do much good for Cooper. Those knockouts affect you and some of the earlier G&P TKOs Sy and Ferreira suffered weren’t even plagueing them after the fight ended, but as for Cooper, we may see that chin hurt again.

We didn’t see much from Cooper other than a brief wrestle-fest that he initiated. While Howard’s skill got this back on the feet shortly, both fighters are well-rounded and very powerful. I like Howard going forward, but he was getting outclassed by wrestling in the beginning, no matter how short the fight lasted.

Whenever this match was on the feet, Sadibou Sy put on a striking clinic, but the wrestling Franca put in place worked wonders for his point-fighting. Sy did show great defense, both in takedowns and on the ground. Even when Franca was in mount, he was struggling to get shots off. When he did, Sy reversed it, making the second round a toss up, but the third round was entirely dominating by Franca. Franca turned up the heat and threw in a large amount of shots while blocking off the cage to finish it.

Both fighters have the playoff spot clinched before this came in, but I am even higher on both fighters. The striking of Sy was next-level and he also had great ground defense. Once Franca found his mojo on the ground, he was all over it. Both these guys could shake up the playoffs and even meet each other again on the other side. 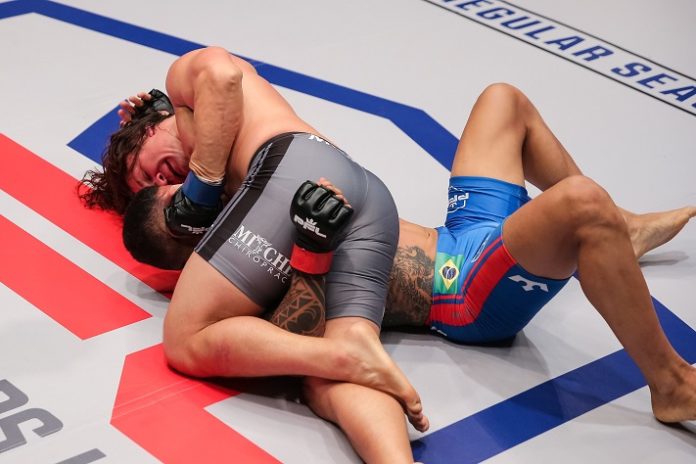 Michaud came in as a massive underdog after his liver kick KO loss to Sadibou Sy in his first 2019 match. He was in a close striking bout for the majority of round one, trading pressure with Ferreira before Ferreira took him down. The wrestler in Michaud was able to get back up quickly and then land a heavy counter shot before getting into a crucifix position and pounding out Ferreira to secure his playoff spot.

I’m still not high on Michaud. He doesn’t seem very tough and can be hurt very easily, cracked many times to the head and body by the kickboxer Ferreira, eliciting loud grunts from Michaud. He was even able to be taken down easily by a kickboxer, even though Michaud is the one with the wrestling credentials! The Welterweights are a group of finishers and that does not bode well for someone who can’t handle being hit.

Our second first-round finish of the night came by Larissa Pacheco, who scored the early submission over Dalziel. Pacheco scored the early takedown and then pushed easily into mount, scoring some early ground and pound before sinking the armbar.

The funny thing is that Dalziel was the one coming in with a prior win. Now she is out of the playoffs and Pacheco is taking her place. I think Pacheco has a great opportunity in the playoffs, considering that her loss was a decision to Kayla Harrison, who many view as the best Lightweight in the game. Aside from that, her other two losses were to Germaine de Randamie and Jessica Andrade, two of the best fighters the UFC has to offer, regardless of sex.

Her ground game is certainly dominant, but she also has heavy hands and solid striking she displayed against Dalziel before taking her opponent down. Her submission skills and top game are elite, but she was not nearly as dangerous off her back in her last match against Harrison. 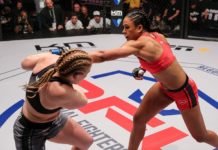 We had a playoff eliminator open our night out and the Muay Thai background did the trick for Fabian. She stuffed all of Charneski’s shots, which were pretty horrible, and then picked her opponent apart using her range and boxing background.

Those six points will push Fabian to the playoffs where she will have a chance to go for the 1 mill and rectify the loss she suffered in her first match. Her takedown defense wasn’t exactly miraculous against the weak fighter in Charneski, but she put up a good volume and clearly has some power in those hands of hers.

What a night of fights. It’s great to see other MMA organizations besides the UFC breaking into the ESPN+ market and getting the name out there.

Check right here to catch up on the last fight card of the PFL. Playoffs will soon be upon us!