This is going to be a fun one. We’re going to Minnesota for a heavyweight title shot contender, but first, the prelims. We are headlined by Ricardo Ramos and newcomer Journey Newsom in a Bantamweight match with a few heavy hitters like Justin Ledet, as well as appearances from Flash Gordon and The Crochet Boss himself. 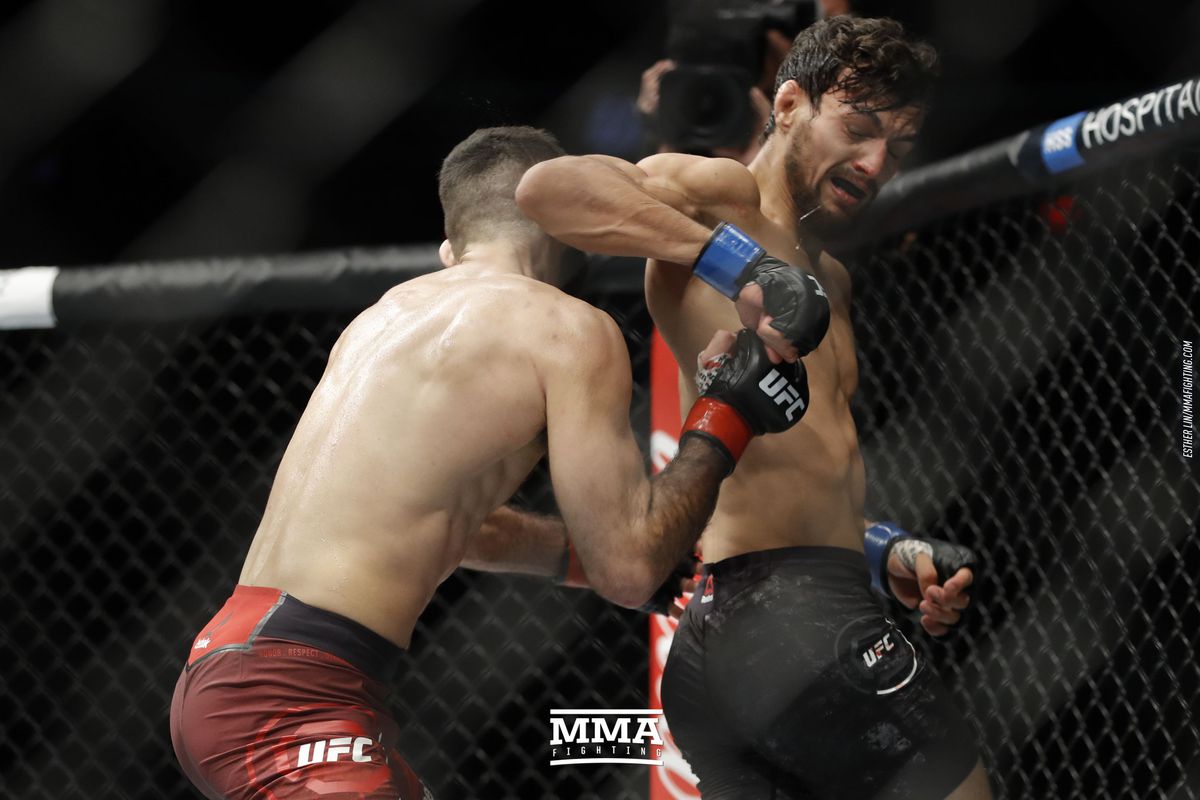 Ricardo Ramos (12-2, 3-1 UFC) was on an absolute tear before being stopped by a spinning kick by Said Nurmagomedov. Ramos is a threat pretty much anywhere. He has skilled Muay Thai striking and pushes a speed with his striking that is hard to deal with. On top of that, he has 6 wins by submission and is an elite on the ground. The struggling element in Ramos’ game has been his gas tank and that remains to be the way he could be exploited here.

Journey Newson (9-2) will be taking his first UFC fight here on short notice. Newsom began his career as a jiu-jitsu practitioner but has put in serious work with his boxing and it has shown. He has some power, landing three knockouts and has a nice right hook. The issue is that Newson is primarily untested and has gone up against severely low-level opposition so there are too many new factors for this newcomer.

On the feet, Ramos is incredibly more technical and much quicker, also having an enormous size advantage. However, the power of Newson may leave opportunities to crack Ramos if he does stay too open, but he has had withstanding defense in the past. On the ground is Newson’s real chance in my eyes. Ramos has great takedown defense but has shown times where he can be taken advantage of in a scramble. That is where Newson’s shot would be. However, the technical striking, experience, and defensive capability on the ground should make this an easy match for the Brazilian.

Take the Shot: Ricardo Ramos via Round 3 Knockout

Vinicius Moreira (9-2, 0-1 UFC) lost his UFC debut to a brutal KO at the hands of Alonzo Menifield (who will appear on the main card) after getting his ticket to the Octagon off of a triangle submission in the Contender Series. Moreira has one thing in mind when he gets into the cage — the submission. 8 of his wins have come by sub and win or loss, Moreira has never seen the third round. That may be partially because his standup is one of the most disgusting things I have ever seen in my life. He only throws one strike at a time, keeps his head on the center line and offers almost no defense besides occasionally raising a hand.

One thing we learned about Eryk Anders at his last performance at UFC 236 was his unbelievable toughness. After taking three knockdowns, he refused to give up. Aside from that, he did not even look like himself in that last match. He assures it was just a bad night, but the three-fight losing streak he is on would disagree. Still, two of those were at Middleweight and all the people he has fought were elite contenders. Moreira is simply not that. He has incredible jiu-jitsu and refuses to do anything but shoot takedowns. Even just relying on pure athleticism and his own wrestling skill, Anders should be able to avoid the ground with Moreira and easily pick apart his chin and non-existent defense to give his UFC spot some credence.

Take the Shot: Eryk Anders via Round 2 Knockout

After a first round submission in the Contender Series, Jordan Griffin lost his debut in a decision to Dan Age after being floored by the wrestling of Ige. “The Native Psycho” will look to show his skills here against the late replacement newcomer. Griffin is an offensive force in every area, holding 5 knockouts with his power and another 8 submissions. Despite spending his match with Ige on his back, Griffin fired off no shortage of submission attempts but was still unable to close the show.

Vince Murdock (10-5) is coming into the UFC as a late replacement matchup here. Murdock fights out of Team Alpha Male and uses his striking to get the job done inside the cage. 7 of his wins have come through with knockouts and Murdock tends to lean on his power to win the fight. On the ground, Murdock is fairly lost and has had trouble against anyone who represents any sort of specialist in that area.

Although the bane got Griffin’s game is still a wrestler, he does not have to worry about that in Murdock. Sure, Vince will take the striking advantage, but Griffin is competitive there and has just as much of a chance of throwing back what he gets hit with. The wrestling and submission game of Griffin should take over quickly over the one-dimensional and honestly, decent-at-best Murdock. The only real shot for the Alpha Male rep is a knockout shot if he can keep the match in boxing range, and that’s a big if.

Take the Shot: Jordan Griffin via Round 2 Submission 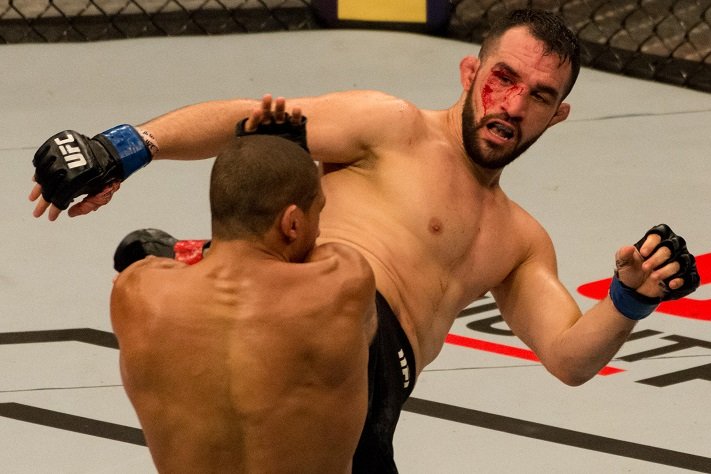 Who doesn’t love a good Jared Gordon (14-3, 2-2 UFC) fight? “Flash” Gordon uses a brawling style and has an excellent game in almost every area. Gordon has no shortage of strikes, boasting one of the highest strike differentials in the Lightweight division. He uses unrelenting pressure along with well-rounded combos, throwing body shots, leg kicks, and whatever else. On top of that, he has wrestling and although he has only gotten two submissions, he recently received his black belt in jiu-jitsu but normally uses his position instead of a quick finish.

Dan Moret (13-5, 0-2 UFC) has not had a showcase yet inside the Octagon, losing via knockout from Gilbert Burns and then a decision in march to Alex White. Every one of Moret’s losses has come by a fighter who is currently in the UFC, so he is certainly no joke, despite the two losses. Moret has decent southpaw striking with a nice job and a hook that I like, but not the best power. Instead, “The Hitman” uses his ground skills to take the advantage. He has 8 submissions on his record and certainly knows what he is doing down there.

If Gordon fights smart, he should come away with an easy win. His striking combined with his pressure should dominate Moret on the feet, as Moret has shown serious issues with his defense. On the ground, Moret can only really get things going if he is on top. Gordon’s wrestling and jiu-jitsu prowess should neutralize any surprise finishes Moret may swing up.

In his last match, Justin Ledet (9-2, 3-2 UFC) was faced up with the surging Johnny Walker. He didn’t get much showtime there, as he was brutally KO’d in 15 seconds. Don’t let that fool you on Ledet, though, because pretty much everyone goes down when they get clocked by Walker. “El Blanco” has 5 wins by submission along with some nice boxing and cardio to take him the distance if needed. I would like to see more kicks from Ledet, but he makes up for it with his speed and massive size, which will be giving him six inches over his opponent in both height and reach.

That opponent here will be South Africa’s Dalcha Lungiambula (9-1), who is making his UFC debut tonight. “Champion” is coming off of the EFC scene, where he was the double champ and their biggest star. Although holding four wins with his striking, Dalcha’s best strengths lie in his judo, a martial art he started as a young child. He has impressive takedowns and one of the best judo throws I’ve ever seen, but has shown issues even against lesser wrestlers.

Although Ledet is coming off of two losses, those losses are to Rakic and Johnny Walker, two fighters most agree are the future of the division. Dalcha’s judo and top game is good, but the fact remains that they are against entirely middling competition, which leaves his true level of expertise untold. On the feet, Ledet is much more technical and also has the ability to grab a submission from the top or bottom if this goes to the ground.

Take the Shot: Justin Ledet via Round 2 Submission

In February, Emily Whitmire (4-2, 2-1 UFC) landed a quick submission victory over Aleksandra Albu to take home her first professional victory by finish. Whitmire’s first three wins all came in decision, where she uses “pitter-patter” striking and wrestling to dominate her opponent. Her failures have really come because of her weak submission defense. Even if “Spitfire” can get the match to the mat where she normally wants it, she can be easily manipulated into a sub hold.

Amanda Ribas (6-1) will be making her UFC debut after her suspension from USADA for astatine was abruptly ended. Because of that suspension, Ribas has not seen the inside of pro cage for more than three years. Before that, however, she was one of the youngest and most talented female prospects, holding 5 of her 6 wins in finishes (3 by KO) and the only loss coming to UFC vet Polyana Viana. Ribas is certainly talented and she has a power that not many Strawweights can bring to the table.

On the feet, Ribas has a clear advantage. Not only does she have serious power, she also has a volume few fighters can match. On the ground, Ribas should also take the advantage through defense and a jiu-jitsu black belt that has helped her many times throughout her career. The only reason I’m hesitating here is because of Ribas’ time off, but after watching some interviews she only seems more motivated and skilled after the forced break.

Maurice Greene (7-2, 2-0 UFC) recently overcame Jeff Hughes in a split decision to make up for his loss in a five-rounder to the very same Hughes. Greene is a massive man standing at 6’7, granting him a 4-inch height and 8-inch reach advantage in this match. Those lanky arms have allowed him to capture four wins by triangle, but Greene can also get the job done with his striking. “The Crochet Boss” showed off that technical boxing in his decision over Hughes, whose base is entirely boxing.

Junior Albini (14-5, 1-3 UFC) is on a three-fight skid, coming up short against the likes of Alexey Oleynik, Arlovski, and Jair Rozenstruik. “Baby” brings a quickness that his size would not suggest and he uses it well in combination with boxing to get TKOs with flurries of punches or knees from the clinch. One element of his game I really like is all the kicks he throws, something most Heavyweights aren’t able to do. Although Albini does have six submissions on his record, that has been his biggest weakness as his submission chops are only helpful off of his back.

In fact, two of Albini’s three sub losses came with Greene’s beloved triangle choke. Albini’s biggest issue has been his defense, where he doesn’t have the skill to avoid shots, especially from someone with some speed on their side. In all of Albini’s UFC fights, he took quite a few shots, many of which almost (or have) ended the fight. Instead, the way Albini has turned the tide (or at least, tried to) is by using his wrestling. That’s exactly what Greene wants and has time and time again used to lock up those triangle chokes.

Take the Shot: Maurice Greene via Round 2 Submission

These prelims are coming to all of us from ESPN+ and these faces are quite possible tomorrow’s contenders. As always, check in tomorrow for the main card picks.