So the 10:30 AM card in St. Petersburg was a damn good time. Despite trying to watch it through a garbage connection on my phone, I was thrilled with the results. I mean the first fight to go out of the second round was the fifth fight. THE FIFTH FIGHT! Let’s run through how it all shook out and what’s next for a lot of these prospects.

Well, once again both fighters succeeded in not going the distance (or to the second round). I severely underestimated Mustafaev’s skill. Well, maybe not his skill. I thought he would be struggling from Ring Rust, but I was sorely mistaken. Mustafaev was all over Fiziev throughout all minute and a half of this fight. Fiziev had no answer for the speed or the power of Mustafaev and it really showed. That being said, Anton from No Country for Old Men, I mean, Mustafaev looked great in there. Even after a few years off, he looks like an entirely different fighter. He’s in a tough division to make a title run, but with more performances like this, he definitely could.

I called it. I said Lord was going to run away with this one and he did. 3 knockdowns in less than a minute! Very impressive stuff from the Pole. I think he has a very promising career and an amazing run in 2019… with knockouts like these, he doesn’t need any R&R time. The one thing I saw is that Michal took a few shots to dish out better ones. While that worked against GA (don’t even think I’m going to type all that out again), against heavier hitters, he could be in trouble. I’d like to see him clean up his defense going forward. How about OSP next?

This was the most shocking loss of the night to me. I did not expect much from Shamil and I thought Tybura’s more technical game would run away with it. Honestly, I didn’t think Shamil looked that great. I’d pin this loss on tactical blunders from Tybura, which were disappointing, to say the least. I don’t have much to say here, other than I’m looking for some nice plus money on Shamil’s next fight.

I kept going back and forth on this match prior to the start. Yakovlev stopped the hype train on de Silva real quick. The overinflated record of Coehlo got exposed real quick by Yakovlev’s ground game. Both of these fighters look solid going forward and the very young de Silva still has many opportunities going forward. As for Yakovlev, I would like to see him against the aforementioned Mustafaev. I think that would be a very intriguing fight that could be a FOTN to remember.

This matchup was definitely the most boring one on the card. A low output striking match with some clinch work ended up going in Aliev’s favor. His takedown defense held up nice, so Nakamura seemed a little lost. I didn’t get a ton of good vibes from either fighter here as it was mostly a defensive match.

Well, it wasn’t a finish, but Evloev dominated Woo everywhere this fight went. I’m liking him a lot going forward and I think he could make a quick turnaround and get his name up there more rapidly. My boy Evloev didn’t reply to me on Twitter, but it’s all good, Titan, I still love ya. I think Evloev would do well against Kyle Bochniak. Both fighters are down for a good ol’ brawl. Dana, Mick, Sean, make it happen.

As for Woo, I don’t like him at all going forward. He did not at all look like a fighter who belongs in the Octagon and unless he displays a better performance, I will be heavy betting against him. He has way too many holes in his game.

This was a seriously dominant performance by Jotko. I scored it 30-25 for the Pole in a match that I thought would end in a knockout. Jotko controlled the entire match with his wrestling and put up a pace that Amedovski had no hope of staying up with. After the first round, Jotko was even running the show on the feet. This was a display that earned Jotko a top 15 shot, in my opinion. This was completely ruthless and he honestly dismantled the entire game of Amedovski. I don’t know who I would like to see him fight next, but I know I am very excited for more of Jotko.

Amedovski didn’t look terrible at first. The issue was he didn’t know how to get up off his back and against a superior grappler in Jotko, he scorched his whole gas tank. His submission defense served him well, as he made it to a decision despite many finishing efforts from Jotko, but his game seemed to disappear along with his cardio. I think a matchup against a striker leans in Amedovski’s favor, but his ground game was far too exposed here.

I said the line was way off, didn’t I? Despite a hugely biased crowd and judges, Modafferi pulled out the win with her wrestling. Her stock is way up after this win, but it’s kind of unfortunate that she is on the end of her career. Still, it’s good to see a staple of the Women’s division getting some recognition.

As for Antonina, this is bad. At 34, she didn’t have a lot of time to get something solid going and now she’s forced back to the drawing board. I think we will get a few more fights out of her even if it’s based on her sister’s reputation alone, but I don’t see anything big in her future.

Marcelo Golm does not belong in the UFC. That will be all. 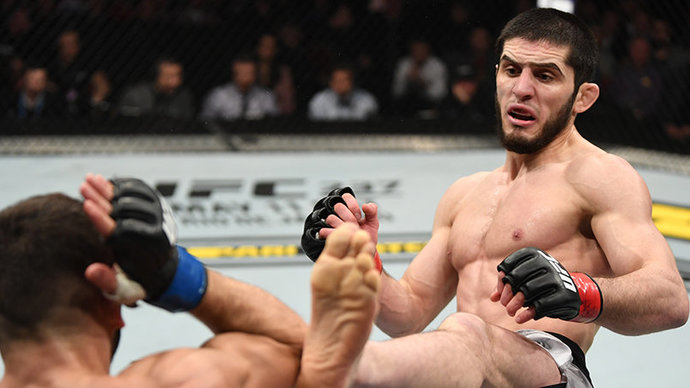 This was very impressive on both fighters. This was probably the highest level grappling match the Octagon has seen in a good bit, with each fighter rolling in and out of dominant positions. Tsarukyan got put in the hot seat in his debut and although he got a loss on his record, it only boosted him up. He made it a real fight on the ground against one of the best grapplers in the division. On the feet, he had a serious advantage. He had speed, explosiveness, and raw power and if he had kept it there, he may have come across with a win. The issue with Armen for me is his fight IQ. Natural habit pulled him onto the ground and while that would be his advantage with most fighters, Islam is on another level. He’s very young though, and I’m sure that will improve as he goes.

Makhachev looked outstanding as always. Mini Khabib was very impressive in his style and actually showed a more well-rounded game than he normally does. His striking looked much more threatening and technical and his wrestling was as good as ever. He is long due for a top 15 matchup. I say give him James Vick. Vick needs a solid performance to get him back on track and he may be able to find it against the weaker striker should he keep it on the feet. One way or another, Makhachev looks better than ever moving forward. 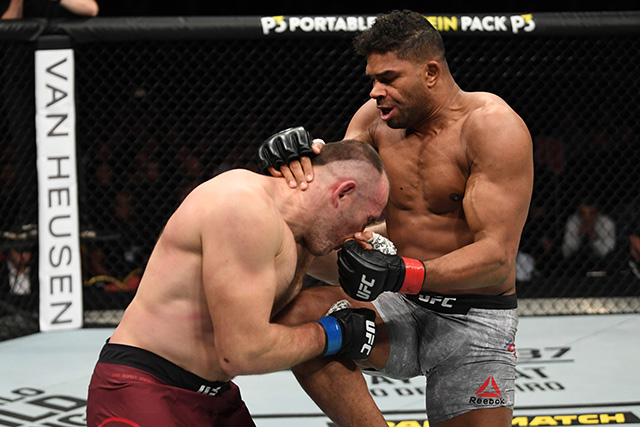 Big knees galore!! Juicereem showed that high-level striking we are so used to. Honestly, though, Overeem is not looking promising to me. Oleinik, someone who is not at all a striker, had him crippled with a wild right and almost finished him ON THE FEET! Perhaps it was the fact that these two are good buddies, but Overeem was not at all aggressive and did not look like himself. I think going forward he is not going to be promising and if the Volkov fight was still live, he would have been smashed.

Oleinik is just too old for this sport. I want to see him just retire already. Please. Please. For your sake, man, just give it a rest.