Once again, we had a great week over at the UFC Apex. Here I am headlining the results as well as how these fighters will perform in the UFC. We had a great, finish-heavy night with truly amazing fights. UFC fan or not, this bouts are incredible to watch!

Contract winners are highlighted in gold. But they all got one.

Solecki came in like a mack truck, firing all sorts of strikes and kicks when pressuring and off his back foot. He found his way to a takedown and despite being against a very highly touted jiu-jitsu expert, he worked his way to dominant position, then choked out his opponent.

As a Lightweight, he has a rough go of things when it comes to UFC opposition. Still, he showed impeccable skill on the mat and in his wrestling, not struggling in the slightest to get the takedown. Even in his striking, he was dominant, and pressured with danger and responded to pressure with danger. I liked his kicking game a lot and although he doesn’t have a massive reach, he makes use of what he’s got with precision and technique, as well as using those teep kicks I love expertly. 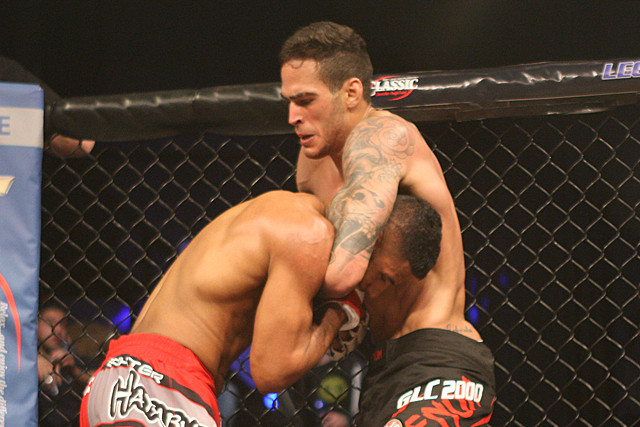 Trocoli came in with a striking base and was looking for a knockout, using his range and kicks to fight off the incoming Bergh. After being shoved up against the cage, Trocoli reversed the position and threw Bergh to the ground, trying an arm triangle before switching to the back and finishing the job.

Coming in with a striking base, it was impressive to see him get a submission over the much more ground-skilled fighter in Bergh. His aggression and overall control worked wonders and his takedown defense was immaculate, ending up with him on top (just about as good of defense as you can get, really). I would have liked to see more of him on the feet, but he was impressive, nonetheless, doing it all with a broken foot.

Plus, the 6’6″ fighter wants to move to Middleweight in the Octagon.

The MMA Lab makes another appearance in Hunter Azure!

Despite only being a pro since 2017, Azure came in hot. He has a fantastic wrestling base and used unrelenting leg kicks to weaken his opponent, making Okon slip a few times from the powerful legs kicks. When this fight was standing, Azure showed an incredible explosive ability as well as quick speed and head movement to avoid big shots when his opponent pressured.

On the ground, this wasn’t close. Instead of the isolation wrestling of Khabib or the pressure-based wrestling of Usman, Azure blended them, throwing in damage as well as a plethora of submission attempts and using his weight and control to dictate the fight on the ground.

He is the prospect I am most high on, especially with being so young in his MMA career and putting in a ridiculously impressive performance.

Maki Pitolo moved up to Middleweight for this one against the returning Sumter. The training partner with Holloway and Yancy Medeiros, Pitolo knew he was at a disadvantage with the reach in the higher weight class so he took it in close to get the win.

And SHIT, does this guy have power.

“Coconut Bombs” got tagged early but kept pushing Sumter up to the fence and crumpled Sumter with body shots. If you still don’t know my thoughts on weight cutting, this tells the tale. Moving up a weight class ups power, movement, and speed and he showed it here without even having to turn into the shots, just thwacking away at the body.

He will have some issues with range, but his ability to work in these shots and getting in close should work wonders if he can replicate this and get in close before people start teeing off on him. He did get hit kind of easily from range, but that will get better the more he fights at Middleweight. Hopefully.

We had a real, good old fashioned brawl with our opener.

Pearce came in right off the go and put on the pressure, using incredible boxing and precise shots to piece up Rosales. He did take a lot of counter shots and needs to work on his head movement, but threw enough back with better power. On the ground, he was doing an otherworldly amount of damage and was able to land a big enough shot to close the show. His grappling was certainly good in this one, but he was easily reversed by the more ground-savvy Rosales when Rosales still had gas.

His strength is most certainly his boxing and he mixes up his punches well, but not a whole lot of kicks. The real attribute he has going is his toughness and absolute chin, willing to take a shot to dish one of his own. I’m still not sold on him, I think he takes too many shots and may not be as skilled on the ground with an opponent who still has fight in him, but a win’s a win. He came in there with what you want to see from a fighter with a drive and willingness to pressure and take all the wind from his opponent’s sail.

If you need more Contender Series content or the recap of the Contender Series this year, click right here! Otherwise, stay tuned because we will be right back next week with more from the hottest show of the summer!